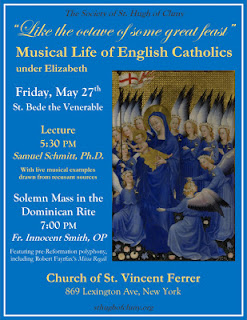 In New York this Friday at St. Vincent Ferrer Church: "The Musical Life of Catholics Under Elizabeth", sponsored by The Society of St. Hugh of Cluny:

This event explores the riches of English Catholic musical and religious culture under the Tudors. The lecture by Dr. Samuel Schmitt will describe the musical life of recusant Catholics in the time of Elizabeth, with live examples provided by Grant and Priscilla Herreid and Charles Weaver. The mass which follows, in the traditional Dominican rite, features the Missa Regali of Robert Fayrfax, essentially in its original liturgical context, in the English Gothic Revival setting of the Church of St. Vincent Ferrer. The contrast in musical styles will serve to highlight what was lost and what was gained in sacred music in the tumultuous passing from the age of Fayrfax to that of Byrd.

Samuel A. Schmitt has dedicated the better part of twenty years to making beautiful music for the Church as an organist, conductor, composer, teacher, and choral singer. He studied the Solesmes method of chant with Dr. Theodore Marier at the Catholic University of America, and earned both a master’s degree in liturgical music with a concentration in organ performance, and a doctorate in musicology for his research into the music and liturgical practice of persecuted Catholics in Elizabethan England. Dr. Schmitt has served as music director and organist at churches in several states and was an assistant organist at the Cathedral of St. Matthew and the National Shrine of the Immaculate Conception, both in Washington, DC. He currently serves as assistant organist at St. Theresa’s Church in Trumbull, CT, while promoting the artistic legacy of his grandfather as executive director of the Carl Schmitt Foundation.

Of course, I can't attend, but I wonder if Dr. Schmitt will discuss the different musical experiences of Recusant Catholics and Church Papists. Church Papists, attending Church of England services in public conformity and Catholic Mass secretly, would experience the full Anglican development of both vernacular and Latin church music, especially if they attended services in any Royal Chapel or at the Universities. A few recusant Catholics, attending Mass secretly, might have heard the Masses and Gradualia composed by William Byrd or Thomas Tallis--if they could attend Mass in the embassy chapels of Catholic countries like Spain or Portugal, they would hear Victoria or Palestrina. I would think the musical experience of English Catholics would be quite varied, and could be determined by class and rank, and certainly by location. Perhaps I'll ask the speaker via email!
Posted by Stephanie A. Mann at 1:00 AM