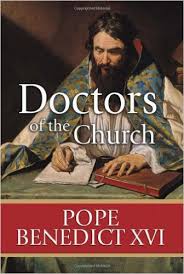 During his series of addresses on the Doctors of the Church during his weekly general audiences , Pope Benedict XVI spoke about St. Bede the Venerable on February 18, 2009:

The Saint we are approaching today is called Bede and was born in the north-east of England, to be exact, Northumbria, in the year 672 or 673. He himself recounts that when he was seven years old his parents entrusted him to the Abbot of the neighbouring Benedictine monastery to be educated: "spending all the remaining time of my life a dweller in that monastery". He recalls, "I wholly applied myself to the study of Scripture; and amidst the observance of the monastic Rule and the daily charge of singing in church, I always took delight in learning, or teaching, or writing" (Historia eccl. Anglorum, v, 24). In fact, Bede became one of the most outstanding erudite figures of the early Middle Ages since he was able to avail himself of many precious manuscripts which his Abbots would bring him on their return from frequent journeys to the continent and to Rome. His teaching and the fame of his writings occasioned his friendships with many of the most important figures of his time who encouraged him to persevere in his work from which so many were to benefit. When Bede fell ill, he did not stop working, always preserving an inner joy that he expressed in prayer and song. He ended his most important work, the Historia Ecclesiastica gentis Anglorum, with this invocation: "I beseech you, O good Jesus, that to the one to whom you have graciously granted sweetly to drink in the words of your knowledge, you will also vouchsafe in your loving kindness that he may one day come to you, the Fountain of all wisdom, and appear for ever before your face". Death took him on 26 May 737: it was the Ascension.

Sacred Scripture was the constant source of Bede's theological reflection. After a critical study of the text (a copy of the monumental Codex Amiatinus of the Vulgate on which Bede worked has come down to us), he comments on the Bible, interpreting it in a Christological key, that is, combining two things: on the one hand he listens to exactly what the text says, he really seeks to hear and understand the text itself; on the other, he is convinced that the key to understanding Sacred Scripture as the one word of God is Christ, and with Christ, in his light, one understands the Old and New Testaments as "one" Sacred Scripture. The events of the Old and New Testaments go together, they are the way to Christ, although expressed in different signs and institutions (this is what he calls the concordia sacramentorum). For example, the tent of the covenant that Moses pitched in the desert and the first and second temple of Jerusalem are images of the Church, the new temple built on Christ and on the Apostles with living stones, held together by the love of the Spirit. And just as pagan peoples also contributed to building the ancient temple by making available valuable materials and the technical experience of their master builders, so too contributing to the construction of the Church there were apostles and teachers, not only from ancient Jewish, Greek and Latin lineage, but also from the new peoples, among whom Bede was pleased to list the Irish Celts and Anglo-Saxons. St Bede saw the growth of the universal dimension of the Church which is not restricted to one specific culture but is comprised of all the cultures of the world that must be open to Christ and find in him their goal.

Pope Benedict certainly did not ignore Bede's importance as a Church historian:

Another of Bede's favourite topics is the history of the Church. After studying the period described in the Acts of the Apostles, he reviews the history of the Fathers and the Councils, convinced that the work of the Holy Spirit continues in history. In the Chronica Maiora, Bede outlines a chronology that was to become the basis of the universal Calendar "ab incarnatione Domini". In his day, time was calculated from the foundation of the City of Rome. Realizing that the true reference point, the centre of history, is the Birth of Christ, Bede gave us this calendar that interprets history starting from the Incarnation of the Lord. Bede records the first six Ecumenical Councils and their developments, faithfully presenting Christian doctrine, both Mariological and soteriological, and denouncing the Monophysite and Monothelite, Iconoclastic and Neo-Pelagian heresies. Lastly he compiled with documentary rigour and literary expertise the Ecclesiastical History of the English Peoples mentioned above, which earned him recognition as "the father of English historiography". The characteristic features of the Church that Bede sought to emphasize are: a) catholicity, seen as faithfulness to tradition while remaining open to historical developments, and as the quest for unity in multiplicity, in historical and cultural diversity according to the directives Pope Gregory the Great had given to Augustine of Canterbury, the Apostle of England; b) apostolicity and Roman traditions: in this regard he deemed it of prime importance to convince all the Irish, Celtic and Pict Churches to have one celebration for Easter in accordance with the Roman calendar. The Computo, which he worked out scientifically to establish the exact date of the Easter celebration, hence the entire cycle of the liturgical year, became the reference text for the whole Catholic Church.

Read the rest of his address here.
Posted by Stephanie A. Mann at 12:30 AM