One of Parker's Finds: The St. Augustine Gospels 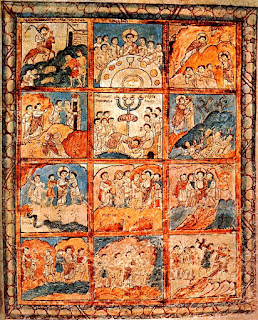 I posted yesterday on Matthew Parker, Elizabeth I's first Archbishop of Canterbury and his library. Remember that his purpose in saving these works from the Dissolution of the Monasteries was to find evidence that the Church in England had always been independent of the "Roman" Catholic Church. One of the most wonderful books he saved shows the opposite of course, because The St. Augustine Gospels had been brought to England by that most Roman of Catholic missionaries, St. Augustine of Canterbury, dispatched by Pope St. Gregory the Great.

The Parker Library blog explains how this Italian, illustrated book of the Holy Gospels came to be reunited with another object connected with Pope St. Gregory the Great earlier this year:

On Friday, January 15, 2016, the St Augustine Gospels- a 6th century gospel book that is reputed to have been sent with St Augustine on his mission from Pope Gregory the Great to convert the English people- was brought from Cambridge to Canterbury Cathedral for the day to serve as inspiration to the assembled Primates at an extraordinary meeting of the Anglican leadership. The goal was for the manuscript to serve as a physical reminder of the core principles of the church; based on long tradition, the words of the Gospels themselves, and the faith that unites all believers.

The visit was in conjunction with the loan of an ivory crozier which is venerated as a relic of Augustine’s mentor, St (formerly Pope) Gregory, from the monastery of San Gregorio al Celio in Rome. These two items were displayed together in the crypt of Canterbury Cathedral during the closing service of the meeting. Following the ceremony, Parker Library staff gave informative talks on the manuscript in the Cathedral library, which were attended by Cathedral staff and visitors. This was an extremely rare opportunity to see the 1,400 year old manuscript out from under glass, as it is typically only available to view in its case in the Parker Library exhibition on one day a month.

Note the parenthetical "(formerly Pope)"--Popes who are also canonized saints in the Catholic Church are referred to as "Pope Saint Insert Name Here": Pope St. Gregory the Great; Pope St. Pius V; Pope St. John Paul II. It's interesting that they are not referred to by their given names: Not Saint Gregorius Anicius; Saint Antonio Ghislieri or Saint Karol Józef Wojtyła. Their name as pope is like their name in religion; religious nuns and priests who are canonized are known by their religious names: St. Teresa Benedicta of the Cross, not St. Edith Stein; St. Therese of Lisieux, not St. Marie Françoise-Thérèse Martin, etc. You might note that the Church of England includes Pope St. Gregory the Great on their calendar of "saints" on September 3, but he is referred to as "Gregory the Great, Bishop of Rome, Teacher of the Faith".

But back to the St. Augustine Gospels: they have had a special role in two papal visits, most recently in 2010:

The St Augustine Gospels—sometimes known as the Canterbury Gospels—are a sixth-century Gospel book of Italian provenance which may have been brought from Rome by St Augustine in 597 on his first mission to re-evangelize Britain. It is the oldest illustrated Latin Gospel book in existence, and has been in England longer than any other book. As a symbol of religion, history, and literacy it is one of the most evocative books in Christendom and upon it the Archbishops of Canterbury still take their oaths of office.

During the papal visit of 1982 these Gospels were given the place of honour at the ecumenical celebration in Canterbury Cathedral – enthroned on the chair of St Augustine, the cathedra or teaching seat of the Archbishop of Canterbury, between Archbishop Robert Runcie and Pope John Paul II. Today they are to be venerated by Archbishop Rowan Williams and Pope Benedict XVI following the reading of a passage from the Gospel according to St Mark.