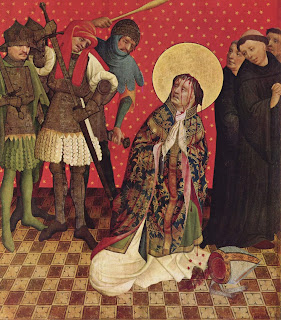 U.S. President Barack Obama has visited Hiroshima (but not Nagasaki) during his state visit to Japan, remembering and lamenting the use of the atomic bomb by the United States to bring Japan to surrender and end (most of) the fighting of World War II. At the same time, St. Thomas a Becket--a first-class relic of his body at least--has returned to England, whence he went in exile during his conflict with Henry II and where he was murdered in the Cathedral at Canterbury--and where his tomb was desecrated and his bones scattered by Henry VIII. There's a good article in The Spectator, in which a Catholic discusses the different responses at two Westminster sites (Westminster Cathedral, the Catholic church and Westminster Abbey, the former Catholic church) and comments:

I went to catch up with it at Westminster Abbey yesterday for evensong and was baffled that the abbey wasn’t full to capacity; it was a respectable turnout but hardly stuffed to the seams as, I gather, it was in Westminster Cathedral the day before. . . .

Weirdly, the CofE doesn’t quite seem to get its head round the Catholic notion of relics, which is that they’re there for a purpose, to be venerated. So, we like if possible to get our hands on them, or at least near them, or at least near enough for you to feel that your prayers are proximate to the actual bits of the saint; it’s the proximity that’s the great thing. Obviously the Abbey hasn’t been used to this sort of thing for a while, since it was a Benedictine Abbey (which Thomas attended), so they kept us at a safe distance from the High Altar; frankly it was hard to see anything at all from where I was kneeling.

One Catholic cleric there observed that the CofE lacked a sense of irony. Either that, or a short memory. The cult of Becket was one of the chief casualties of the Reformation; there was the 1538 Proclamation which mentioned, inter alia, that his image was to be ‘put down and avoided out of all churches, chapels and other places’. His name was to be erased from all liturgical books and his office, antiphons and collects were to be said no more, ‘to the intent that his grace’s loving subjects shall be no longer blindly led and abused to commit idolatory’. And that’s what happened. Yet yesterday, there was the choir of the Abbey singing as an introit a medieval hymn to Thomas. Ironic, as my friend observed.

It would be possible, I suppose, to see the welcome to Thomas’s elbow by the CofE and the Catholic church as a sign that the Reformation is over; the war is at an end. . . .

The Daily Mail posts a story with many pictures of the services at Westminster Cathedral.
Posted by Stephanie A. Mann at 12:30 AM