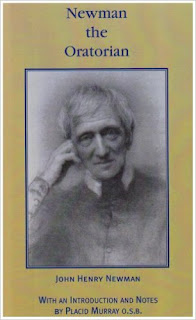 From The Catholic Herald earlier this month;

A new community of the Congregation of the Oratory of St Philip Neri is to be established in Bournemouth.

The community, which will be inaugurated at the Sacred Heart church in September, will be the sixth Oratory to be set up in England.

Bishop Philip Egan of Portsmouth, who invited the Oratorians to Bournemouth, said they would form part of a “major evangelisation drive”.

The centre will be an “Oratory in formation” and will be made up of Fr Dominic Jacob, co-founder of the Oxford Oratory, Fr Peter Edwards and Fr David Hutton.

And the following week, The Catholic Herald posted this interview, discussing why the number of Oratories in England has doubled in the past few years.Certainly, the beatification of the founder of the English oratory movement, John Henry Newman, has something to do with it. You may also listen to Father Peter Edwards, one of the priests listed above, discuss his vocation as an Oratorian with Vatican Radio. Note that Father Edwards is a convert from Anglicanism.

The EWTN Library contains this article, originally published in Faith & Reason in 1989: "Newman and St. Philip Neri: The Quest for Sanctity" by Jonathan Robinson, C.O. An excerpt:

Dom Placid Murray in his Newman the Oratorian has edited Newman's Chapter addresses and occasional papers on the Oratorian vocation. This book establishes that the idea of the Oratory was central to Newman's life as a Catholic. His introduction, and even more Newman's own papers, show how carefully Newman decided on how he was to live his life as a Catholic priest, and how deep his commitment to the Oratory was. Father Stephen Dessain has said: "It would be hard to exaggerate the importance of the Oratory for Newman. It was his chosen vocation; to found it in England was the first commission he received from the Catholic authorities; it was the framework for the rest of his long life, and, as has so often been the case with founders, through it some of his cruellest trials came."

What was this idea of the Oratory which so influenced Newman? It was not St. Philip's idea to found a new order or congregation in the Church. He wanted groups of secular priests living together without taking vows, priests who would live with no bond but that of charity, but who would live a life comparable to that of the best religious. As the Oratory developed each house lived its own separate existence, and was situated in a town or city with a church of its own. The work of an Oratory is prayer, preaching and the administration of the sacraments. The essential thing about an Oratorian vocation is a call to the life of prayer. This is clear from the Constitutions or Traditions of the Oratory (what would be called the Rule in a religious order); it is clear from St. Philip's own teaching; and it is clear from the lives of all the great Oratorians. So an Oratory is supposed to be just that--a place where people pray.

The Oratory, as an institution, is a testimony to the centrality of the life of prayer, and thus a witness to the reality of God. Furthermore, a life ordered around this centrality of prayer is an object lesson that the acknowledgement of God is required for the obtaining of that happiness and satisfaction everyone is looking for.

The House and Church of the Oratory are supposed to be a center of prayer, of preaching, of study, and of learned work. Now, you cannot have a center without stability, without people who are always at the center to provide the appropriate services, and do the required work. Thus the idea of stability and of a life at home are central to Philip's conception.