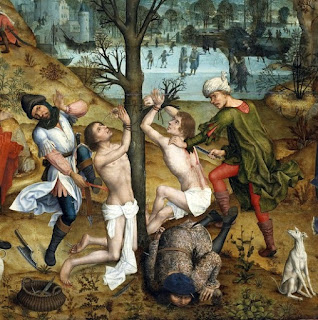 Shakespeare's Henry V recalls to his troops that they fight the battle of Agincourt on the feast of the twin martyr saints, Saints Crispin and Crispinian:

This day is called the feast of Crispian:
He that outlives this day, and comes safe home,
Will stand a tip-toe when the day is named,
And rouse him at the name of Crispian.
He that shall live this day, and see old age,
Will yearly on the vigil feast his neighbours,
And say 'To-morrow is Saint Crispian:'
Then will he strip his sleeve and show his scars.
And say 'These wounds I had on Crispin's day.'
Old men forget: yet all shall be forgot,
But he'll remember with advantages
What feats he did that day: then shall our names.
Familiar in his mouth as household words
Harry the king, Bedford and Exeter,
Warwick and Talbot, Salisbury and Gloucester,
Be in their flowing cups freshly remember'd.
This story shall the good man teach his son;
And Crispin Crispian shall ne'er go by,
From this day to the ending of the world,
But we in it shall be remember'd;
We few, we happy few, we band of brothers;
For he to-day that sheds his blood with me
Shall be my brother; be he ne'er so vile,
This day shall gentle his condition:
And gentlemen in England now a-bed
Shall think themselves accursed they were not here,
And hold their manhoods cheap whiles any speaks
That fought with us upon Saint Crispin's day. 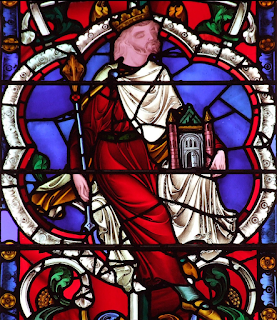 But the historical Henry V had in mind another saint on the day of battle: St. John of Beverley, since October 25 was the feast of the translation--movement--of his relics. As the website of the Beverley Minster explains:

In 1415 King Henry V won the battle of Agincourt on the Feast of St. John’s translation (25th October). In 1420 the King visited John’s shrine to give thanks, and made him one of the patron saints of the Royal family.

The following extract is from prayers said on the feast of the translation:

“For though God decreed to give help to this church of His and the kingdom of England’s inhabitants, on the account of the merits of diverse saints with which she gloriously shines, yet He has of late more miraculously comforted them, as we sincerely trust, by the special prayers of the almificious confessor and pontiff, his most blessed John of Beverley….

O the ineffable consolation of these our times, especially refreshing and memorable to all ages, that is the gracious victory of the most Christian Prince Henry the fifth king of England and his army in the battle lately fought at Agincourt, in the county of Picardy, which was granted to the English by the immense mercy of God to the praise of His name and the honour of the kingdom of England on the feast of the translation of the said saint.

In which feast, during the engagement of our countrymen with the French…..holy oil flowed by drops like sweat out of his tomb as an indication of the Divine mercy toward his people, without doubt through the merits of the said most holy man.”

Henry VIII destroyed his shrine; his feast was removed from the Roman Calendar after the Second Vatican Council.
Posted by Stephanie A. Mann at 12:30 AM