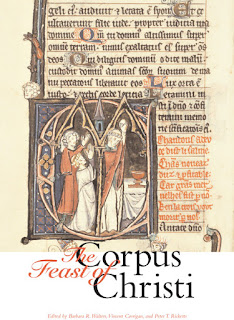 Next to attending Mass, my favorite devotion is Eucharistic Adoration and Benediction. Today's feast, traditionally celebrated on the Thursday following Trinity Sunday but usually moved to the following Sunday, combines both: Mass with special emphasis on the doctrine of the Real Presence, Adoration of the Blessed Sacrament in Exposition (the Host in the Monstrance), a public procession, and Benediction.

Penn State University Press published a book about the development of this feast in 2006:

The feast of Corpus Christi, one of the most solemn feasts of the Latin Church, can be traced to the Fourth Lateran Council in 1215 and its resolution of disputes over the nature of the Eucharist. The feast was first celebrated in Liège in 1246, thanks largely to the efforts of a religious woman, Juliana of Mont Cornillon, who not only popularized the feast, but also wrote key elements of an original office.

This volume presents for the first time a complete set of source materials germane to the study of the feast of Corpus Christi. In addition to the multiple versions of the original Latin liturgy, a set of poems in Old French, and their English translations, the book includes complete transcriptions of the music associated with the feast. An introductory essay lays out the historical context for understanding the initiation and reception of the feast.

In 2012, during his homily for the celebration of this feast, Pope Benedict XVI spoke about the important connection between actual participation in Holy Communion at the Sacrifice of the Mass and Adoration of the Blessed Sacrament outside of Mass, commenting upon the unfortunate idea that the latter detracts from the former:

First of all, a reflection on the importance of Eucharistic worship and, in particular, adoration of the Blessed Sacrament. We shall experience it this evening, after Mass, before the procession, during it and at its conclusion. A unilateral interpretation of the Second Vatican Council penalized this dimension, in practice restricting the Eucharist to the moment of its celebration. Indeed it was very important to recognize the centrality of the celebration in which the Lord summons his people, gathers it round the dual table of the Word and of the Bread of life, nourishes and unites it with himself in the offering of the Sacrifice.

Of course, this evaluation of the liturgical assembly in which the Lord works his mystery of communion and brings it about still applies; but it must be put back into the proper balance. In fact — as often happens — in order to emphasize one aspect one ends by sacrificing another. In this case the correct accentuation of the celebration of the Eucharist has been to the detriment of adoration as an act of faith and prayer addressed to the Lord Jesus, really present in the Sacrament of the Altar.

This imbalance has also had repercussions on the spiritual life of the faithful. In fact, by concentrating the entire relationship with the Eucharistic Jesus in the sole moment of Holy Mass one risks emptying the rest of existential time and space of his presence. This makes ever less perceptible the meaning of Jesus’ constant presence in our midst and with us, a presence that is tangible, close, in our homes, as the “beating Heart” of the city, of the country, and of the area, with its various expressions and activities. The sacrament of Christ’s Charity must permeate the whole of daily life.

Actually it is wrong to set celebration and adoration against each other, as if they were competing. Exactly the opposite is true: worship of the Blessed Sacrament is, as it were, the spiritual “context” in which the community can celebrate the Eucharist well and in truth. Only if it is preceded, accompanied and followed by this inner attitude of faith and adoration can the liturgical action express its full meaning and value. The encounter with Jesus in Holy Mass is truly and fully brought about when the community can recognize that in the Sacrament he dwells in his house, waits for us, invites us to his table, then, after the assembly is dismissed, stays with us, with his discreet and silent presence, and accompanies us with his intercession, continuing to gather our spiritual sacrifices and offer them to the Father.

In this regard I am pleased to highlight the experience we shall be having together this evening too. At the moment of Adoration, we are all equal, kneeling before the Sacrament of Love. The common priesthood and the ministerial priesthood are brought together in Eucharistic worship. It is a very beautiful and significant experience which we have had several times in St Peter’s Basilica, and also in the unforgettable Vigils with young people — I recall, for example, those in Cologne, London, Zagreb and Madrid. It is clear to all that these moments of Eucharistic Vigil prepare for the celebration of the Holy Mass, they prepare hearts for the encounter so that it will be more fruitful.

To be all together in prolonged silence before the Lord present in his Sacrament is one of the most genuine experiences of our being Church, which is accompanied complementarily by the celebration of the Eucharist, by listening to the word of God, by singing and by approaching the table of the Bread of Life together. Communion and contemplation cannot be separated, they go hand in hand. If I am truly to communicate with another person I must know him, I must be able to be in silence close to him, to listen to him and look at him lovingly. True love and true friendship are always nourished by the reciprocity of looks, of intense, eloquent silences full of respect and veneration, so that the encounter may be lived profoundly and personally rather than superficially. And, unfortunately, if this dimension is lacking, sacramental communion itself may become a superficial gesture on our part.

Our Extraordinary Form of the Latin Rite community, which usually gathers for Mass on Sunday at the Church of St. Anthony of Padua at 1 p.m., will instead worship today at the same hour at the Church of the Blessed Sacrament. The choir and a small orchestra will sing and play one of Mozart's Credo Masses, and other music proper to the feast:

And there will be Exposition of the Blessed, a procession and Benediction after Mass.

Fortunately for me, there will be two more opportunities for Exposition, Adoration, and Benediction next week: First Friday on June 3rd at the Cathedral of the Immaculate Conception and the Parish Holy Hour next Sunday on June 5th at Blessed Sacrament!

And there's also First Friday Benediction at Blessed Sacrament on June 3rd!
Posted by Stephanie A. Mann at 1:00 AM