Holy Martyrs of England, Pray for Us! 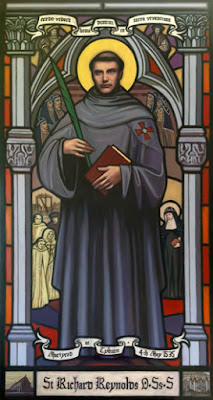 Today is the great feast honoring all of the Catholic Martyrs of the English Reformation: those canonized by Popes Paul VI and Pius XII and those beatified by Popes John Paul II, Pius XI, and Leo XIII. This feast was moved to this date in 2000 with new liturgical calendars for the dioceses of England and Wales approved by the Vatican; then in 2010 it was elevated to a Feast (not just a Memorial). According to the Liturgical Calendar of England:

The English Men and Women martyred for the Catholic Faith 1535–1680 and beatified or canonised by the Holy See. On this day in 1535 there died at Tyburn three Carthusian monks, the first of many martyrs, Catholic and Protestant, of the English reformation. Of these martyrs, forty two have been canonised and a further two hundred and forty two declared blessed, but the number of those who died on the scaffold, perished in prison, or suffered harsh persecution for their faith in the course of a century and a half cannot now be reckoned. They came from every walk of life; there are among them rich and poor, married and single, women and men. They are remembered for the example they gave of constancy in their faith, and courage in the face of persecution.

On May 4, 1535, the protomartyrs of this remarkable group of men and women suffered at Tyburn: St. John Houghton, St. Augustine Webster, St. Robert Lawrence, Blessed John Haile, and St. Richard Reynolds, were brutally executed at Tyburn before a crowd of Court witnesses. Some sources even suggest that Henry VIII was there in disguise. Drawn on hurdles from the Tower of London (whence St. Thomas More saw them depart), they were hung and quartered while still alive.

The painting . . . was specially commissioned by the Chairman of the Governing Body, Andrew Cole, for the Official Opening of St Richard Reynolds Catholic College on 19th September 2013. The artist is Jared Gilbey. St Richard Reynolds is shown wearing the habit of the Order of the Most Holy Saviour, he holds the book of Psalms in his left hand and a palm reed in his right hand, a symbol of his martyrdom. To his right are the Carthusian priors and Blessed John Hailes, behind them is the Tyburn Tree; to his left, Queen Birgita of Sweden (St Birgitta of Sweden) who founded the Order. To the lefft and right of the base of the painting can be found Syon Abbey which he entered in 1513 and The Tower of London where he was held until his execution. At the top left and right are Henry VIII who sigend his death warrant and his Chancellor, Thomas Cromwell who prepared the case against him. In a scroll above his head is a verse from Psalm 27 which Richard Reynolds quoted in his trial, Credo videre bona domini in terra viventium (I believe to see the good things of the Lord). It is from this verse that the College motto is derived; Videte bona Domini (See the good things of the Lord).

The Catholic Compass, the blog of the Catholic Truth Society, posted reflections on individual English and Welsh martyrs since the 13th of April, including this prayer, by Father John Hogan:

To you, Holy Martyrs of England and Wales, we commend our prayers and our needs in these difficult times. As you laid down your lives for Christ and His Church, we ask that we may emulate your sacrifice in our daily lives, living as true and humble disciples of Christ.

May His Gospel so penetrate our minds and hearts that we may become what He urges us to be: salt of the earth and light of the world, making Him present through holy lives to the men and women of our time. Sustain us with your loving presence, be our companions on our earthly journey.

Defend us in moments of trial, console us in sorrows and remind us of that joy which Christ implants into the souls of His devoted servants. Intercede that we may truly be servants of mercy and reconciliation. Watch over us and guide us in our Christian lives so one day we may merit to be with you in the Kingdom of our Heavenly Father. Amen.

All you Holy Martyrs of England and Wales, pray for us.
That we may be made worthy of the promises of Christ.

Let us pray
Almighty God, who in our country [England and Wales] raised up martyrs from every walk of life to vindicate the authority of your Church in teaching and worship, grant through their intercession, we pray, that all our people may be gathered once again to celebrate the same sacraments under the one Shepherd, Jesus Christ your Son. Who lives and reigns with you in the unity of the Holy Spirit, one God forever and ever. Amen.

Anna Mitchell confirmed with me that my interview for this Feast will broadcast at 6;45 a.m. Eastern time/5:45 a.m. Central time this morning on the EWTN hour of the Son Rise Morning Show--what she calls "the primo spot"!
Posted by Stephanie A. Mann at 12:30 AM