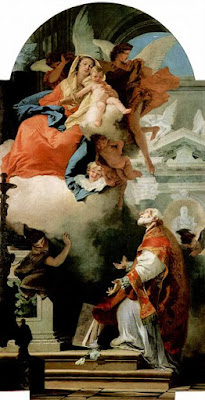 Today is the feast of St. Philip Neri, Blessed John Henry Newman's patron and model as an Oratorian. His feast this year comes soon after Pentecost and Trinity Sunday. This homily describes the "personal Pentecost" that Philip Neri experienced and its effects:

To depict this special quality that people experienced in their contact with him, St Philip is often described in art, poetry and prayers as having a heart of fire. But this is not merely a metaphor. During his lifetime many people noticed that he seemed always to be warm; he was often flushed, and would walk around with his cassock unbuttoned at the chest, even in the middle of winter. Not only that, but several of his disciples reported that his heart used to beat violently when he prayed or preached, sometimes enough to shake the bench on which he was sitting. Some people could hear his heart beating across the room, and others experienced unspeakable peace and joy when he embraced them and held their heads to his breast. Typically of St Philip, although so many people witnessed this incredible warmth and palpitation of his heart, no one knew where it came from, until St Philip was on his deathbed. There he told one of his favourite disciples, Father Pietro Consolini, who waited until he himself lay dying, early in 1643, before he revealed the secret of St Philip’s personal Pentecost.

Over a period of about ten years, while St Philip was in his twenties and still a layman, he used to spend many nights in prayer, either on the porticos of Roman churches, or in the catacombs, the underground burial places of the martyrs outside the walls of the City. On the vigil of Pentecost in 1544, St Philip was praying in the Catacombs of Saint Sebastian, on the Via Appia, as he had done many times, and asking God to give him the Holy Spirit. As the night passed, St Philip was suddenly filled with great joy, and had a vision of the Holy Spirit, who appeared to him as a ball of fire. This fire entered into St Philip’s mouth, and descended to his heart, causing it to expand to twice its normal size, and breaking two of his ribs in the process. He said that it filled his whole body with such joy and consolation that he finally had to throw himself on the ground and cry out, “No more, Lord! No more!”

This mystical experience was a defining moment in St Philip’s life. But he did not make much of its extraordinary nature, and he would not want us to do so either. “As for those who run after visions,” he would say, “we must lay hold of them by the feet and pull them to the ground by force, lest they should fall into the devil’s net.” Rather, its importance lay in the fact that, from that moment on, St Philip was convinced and constantly aware of the presence and action of the Holy Spirit in him and through him. This mystical experience of the Spirit gave him great confidence in living his vocation, and carrying out what he saw to be his special mission. He was sure that he had received the gifts of the Holy Spirit, and this assurance set him free to bear the Spirit’s fruits.

Therefore, Blessed John Henry Newman called his patron a “vessel of the Holy Spirit” and the homily goes on to use commentary from Newman and others to highlight the gifts of the Holy Spirit in St. Philip Neri's life. Read the rest there.

St. Philip Neri, pray for us! Blessed John Henry Newman, pray for us!
Posted by Stephanie A. Mann at 12:30 AM