With Ropes Around Their Necks, An Offer of a Pardon 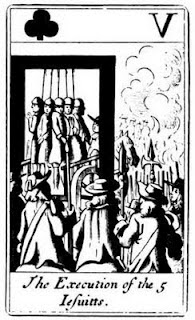 Today is the anniversary of the martyrdoms of five Jesuit Popish Plot Martyrs on June 20, 1679, who died as a result of the false, perjurous claims there was a vast, Jesuit, Catholic-wing conspiracy to assassinate Charles II and bring the Catholic Duke of York, James, his brother to the throne. Oates convinced the Whigs in Parliament that he knew who was in on this plot and he was given the authority to round up the suspects. At the trials for his accused, any witnesses they brought forward would be discounted by the Prosecution and the Judge, because, of course, they were also Catholics and if not in on the plot were probably in favor of the plot! After one of these manifestly unfair trials, five Jesuits were martyred on June 20, 1679 at Tyburn Tree in London:

Fathers John Fenwick and William Ireland were arrested in September of 1678 and held in prison. Then Oates captured Fathers Thomas Whitbread and Edward Mico, who were ill with the plague and living in the household of the Spanish ambassador. By December that year Father Whitbread was well enough to join Fathers Fenwick and Ireland in Newgate Prison; Father Mico died in custody. Father William Ireland was executed in January of 1679 with the Jesuit laybrother John Grove, but Fenwick and Whitbread awaited their fate and another trial. They had given evidence that refuted Oates', so Oates needed more time to gather more evidence! Fathers John Gavan, William Harcourt, and Anthony Turner in the meantime had been arrested and they were brought together with Father Fenwick and Whitbread (tried for the second time--no double jeopardy in Charles II's courts for Catholics!)

At the trial, the defense produced plenty of  witnesses from Saint-Omer to testify that Oates hadn't even been in England the day he was supposed to have heard the Jesuits plotting to assassinate King Charles II--he was at the college in St. Omer's that day. But the Court told the jury to trust Oates' evidence over the Catholic witnesses. The jury returned a verdict of guilty, condemning the five Jesuits to die for treason.

The circumstances of their execution were quite dramatic. All five were standing in a cart under the scaffold, with their hands bound and the nooses around their necks. They had each spoken, each prepared themselves for death, when suddenly, a rider galloped up, crying "A Pardon, A Pardon!"

Charles II issued them a conditional pardon to spare their lives--all they had to was admit their guilt and tell him all they knew about the plot. Trouble was that they weren't guilty of any plot and they couldn't tell him what they knew because there wasn't any plot in the first place! They declined the pardon, protesting that they could not lie to save their lives--they could not risk their immortal souls to save their physical bodies.

Therefore, they prepared themselves again for death--the rider returned to Charles II with the news--the cart pulled away and they were hung until dead before their bodies were quartered and their heads cut off. They were buried in the churchyard of St. Giles in the Fields. According to the church's website, there are actually eleven of twelve martyrs originally buried there in the churchyard:

The testimony of Titus Oates, led during 1678-81, to the burial in St Giles Churchyard of twelve Roman Catholic martyrs who were later beatified - Whitebread, Harcourt, Fenwick, Gavan, Turner, Coleman, Langhorne, Mico, Ireland, Grove, Pickering and Oliver Plunket, Archbishop of Armagh. All were priests except Coleman, who was secretary to the Duchess of York, Langhorne, who was a barrister, Grove, and Pickering, who was a laybrother; and all except Mico, who died after his arrest, had been executed at Tyburn (then close to where Marble Arch now stands). The first five are the Jesuit fathers with whom Plunket asked to be buried in the churchyard of St. Giles. The burial place is said to be near the north wall of the church. Though the body of Oliver Plunket, who was canonised in 1975, was later exhumed and taken to Lamspringe in Germany (the head being now at Drogheda and the body at Downside), there is in the St. Giles Burial Register for 1 July, 1681 a most legible entry of the burial.
Posted by Stephanie A. Mann at 12:15 AM