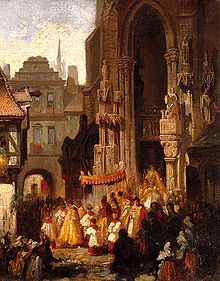 The Feast of Corpus Christi which used to be celebrated the Thursday after Trinity Sunday but has been moved to Sunday, is the feast of the Eucharistic Body of Christ. This is the source and summit, the center of our Sacramental life.

Before the Reformation in England, it was a day of great ritual, with processions comparable to Holy Thursday and the performance of the Mystery Plays, which enacted salvation history from Creation to the Second Coming. This Feast was introduced in England during the early 14th century (1318) with the Office by St. Thomas Aquinas, but it gained almost immediate popularity among the English, according to Eamon Duffy and Miri Rubin. The English expressed their devotion to the Real Presence in the Holy Eucharist with the formation of Corpus Christi Guilds to prepare for the annual celebrations. The cycle of Mystery plays also required months of preparation and fundraising for the decorations, so in York and other cities, the Catholic community worked together. Anthony Esolen interprets the Wakefield cycle of plays here.

Adoration and devotion to the Blessed Sacrament was essential to pre-Reformation Catholic spirituality in England. The Corpus Christi was the center of the entire Paschal Mystery of Incarnation, Redemption and Resurrection. For the individual Christian, Christ's Real Presence in Mass and in adoration outside of Mass, symbolized their participation in that Mystery--even though they in the normal course of the liturgical year received Holy Communion rarely.

That devotion is also expressed in the allegorical Corpus Christi Carol:

Lulley, lully, lulley, lully,
The faucon hath born my mak away.
He bare hym up, he bare hym down,
He bare hym into an orchard brown.
In that orchard ther was an hall,
That was hanged with purpill and pall.
And in that hall ther was a bede,
Hit was hangid with gold so rede.
And yn that bede ther lythe a knyght,
His wowndes bledyng day and nyght.
By that bedes side ther kneleth a may,
And she wepeth both nyght and day.
And by that bedes side ther stondith a ston,
"Corpus Christi" wretyn theron.

The Feast and the festivities associated with it were suppressed, of course, by order of the government, although revived briefly during Mary I's reign. Celebration of the Feast of Corpus Christi was forbidden early in the reign of Edward VI in 1548. The last record of any performance of the plays dates to 1575 in Chester, and the mayor was called to London and the Star Chamber for questioning. He was released and returned to Chester, playless until 1951, when the cycle was revived.

Blessed Dominic Barberi led the first post-Reformation Corpus Christi procession on June 10, 1844 at Aston in Staffordshire, where he had established the Passionist Order. Corpus Christi processions after Mass have also been revived in the Catholic Church in the USA. For a period after the Second Vatican Council, devotions to the Blessed Sacrament outside of Mass were suppressed in a misinterpretation of the "spirit of Vatican II". (But that's a subject better suited to other blogs.) Nonetheless, the public display of our belief in and devotion to the Real Presence of Jesus Christ in the Blessed Sacrament is definitely an unusual sign today. When the English processed in the fourteenth and fifteenth centuries it was in the midst of a community of belief. Although the 39 Articles of the Church of England deny any sacramental reality of the real presence in holy communion, the Feast of Corpus Christi is on the Kalendar--on the Thursday after Trinity Sunday!
Posted by Stephanie A. Mann at 2:02 AM