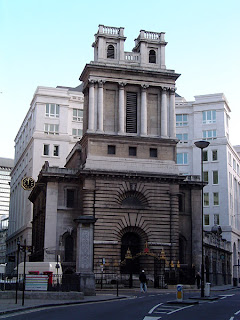 The Wall Street Journal featured this story about St. Mary Woolnoth,  "one of six London churches designed between 1712 and 1733 by the English Baroque architect Nicholas Hawksmoor (1662-1736)," in connection with an exhibition at the Royal Academy of Arts:

Wedged into a triangle where Lombard Street meets King William Street, around the corner from the Bank of London, St. Mary Woolnoth, when finished in 1716, stood alone in a newly cleared area, a bold effect that later centuries reversed. Hemmed in now by its City of London neighbors and blackened by traffic exhaust, it can almost vanish against its surroundings in the gray afternoon light. Tourists of architecture are often reduced to stopping by a Starbucks, imbedded in the church's eastern flank, to ask directions to the entrance.


Once you are able to assess it from street to steeple, however, the structure becomes hard to ignore. From the chesty thrust of its rusticated facade, to the outward curve of the pediment, to an entablature of three blind square windows crowned by six Corinthian columns (repeated inside) and capped with a pair of squat balustraded turrets, the exterior manifests Hawksmoor's unorthodox interpretation of the classical tradition.


Even less normal for an Anglican church in the Georgian period is the outward emphasis on the force of gravity rather than any upward possibility of heavenly grace. St. Mary Woolnoth has a threatening mien, as though its fortresslike walls were needed to withstand dangerous pressures.

Hawksmoor is called an English Baroque architect. When I think of the Baroque architecture on the Continent of Europe, I think of the great Catholic churches of "Counter-Reformation" Rome--works by Bernini, Borromini, and da Cortona--works designed to emphasize the grandeur and confidence of Catholicism. English Baroque, as developed by Christopher Wren, was more restrained, evidently, and included elements of classical Palladian architecture. Former slave trader and hymnist John Newton was incumbent at St. Mary Woolnoth from 1780 to 1807 and William Wilberforce attended services there--I wonder if the scenes from the movie Amazing Grace were filmed there.