Book Review: The Man on a Donkey 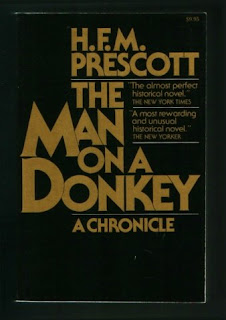 H.F.M. Prescott's The Man on a Donkey is called a Chronicle; as Prescott tells the stories of the historical and fictional characters, she interweaves their stories into the epic of the Pilgrimage of Grace. Each character's chronicle begins and ends, first with their life's story before the great events of 1535 and 1536, then through the long autumn and winter of that year and into spring of 1537, when each of their chronicles end with either their deaths or their departures. Three characters are historical: Christabel Cowper, the Prioress of Marrick, Thomas, Lord Darcy, and Robert Aske, captain of the Pilgrimage of Grace. Two are Prescott's creation, Julian Savage, fictional sister of Margaret Bulmer, and Gilbert Dawe, a priest who has become an evangelical.

One of my first comments is how Prescott's clerical and religious characters are not at all ideal: Cowper is a mercenary and selfish character; she is dedicated to the survival of Marrick mainly because she enjoys her power and comforts; Gilbert Dawes may believe he has found the truth, but he is as cruel and rapacious as she is, abandoning his lover and their children, mistreating the poor son who survives--when their chronicles end she has (actually at the beginning of the novel) lost her position and he has realized his failure. Dawes knows that he he has the true faith, but that he is not saved; he may be able to preach it, but he will not gain Heaven: he knows only a Gospel of judgment and wrath--there is no love.

With Thomas, Lord Darcy, Prescott has a back story to fill in based on historical data; with Robert Aske, she can create a background of family tension and some rivalry, including the depiction of how Aske's brother Kit wounds him and causes him to lose an eye, and the strange mixture of regret and hatred that produces in Kit. Darcy is a nobleman who speaks against the changes Henry VIII is leading the country into based on his loyality and faithfulness to the Church and the Catholic Faith--he once went to the Holy Land for a crusade.

Julian is a great character--one of the best scenes depicts her feelings when she has to get a tooth pulled: fear and anguish before; joy and relief after (but the narrator reminds us that another tooth will probably have to be pulled someday). Her fortunes are for a long time connected to her sister Margaret's, who is sexy, sensual young woman of desire--she marries and cuckolds her husband. Julian is painted with the same brush of infidelity and loose living, spends some time in the convent at Marrick. Eventually, she gets married to a man who really loves her but has a hard time reconciling his love with his needs for control as the master of the house and his concern about her love for Robert Aske.

There is another important character: Malle, a poor woman who has visions; she sees Christ as the Man on a Donkey. Her visions are dangerous: after all, the Nun of Kent was executed for her statements against Henry VIII. Malle prophesies darkness and pain. She takes care of Dawe's poor, sick son Wat, who otherwise has known only abuse and neglect.

Prescott provides vignettes of life at court, in the convent, in the Aske home, including crucial scenes that depict the progress of Henry VIII's tyranny over his family, the nobility, the church, and his country. There are brief scenes of Thomas More's trial, Katherine of Aragon's death, Anne Boleyn's imprisonment, Mary's signing of the statement rejecting her parents' marriage and accepting her own bastard status, etc. When the Pilgrimage of Grace begins, the double-dealing of the Duke of Norfolk, the Archbishop of York, Aske's own family, and most of all of Henry VIII, makes it a confusing effort. There is no great sweep of power and enthusiasm--the effort just plods on. There is a crucial moment when Darcy proposes seeking the aid of the Holy Roman Emperor to fight against Henry, but then the negotiations and the deceptions go on.

There's no Braveheart moment when victory, moral or military, is won, because that's not what happened. The Pilgrimage failed: Margaret Bulmer, Lord Darcy and Robert Aske are sentenced to death and Aske twists in the wind and rain in chains at York Castle; the dissolution of the monasteries continues; the convent at Marrick closed, and the illuminated pages of the library's Bibles and prayer books scattered, to be made into paper boats by Malle at the end, flowing away down the river of time.
Posted by Stephanie A. Mann at 2:17 AM

Email ThisBlogThis!Share to TwitterShare to FacebookShare to Pinterest
Labels: dissolution of the monasteries, H.F.M. Prescott, Henry VIII, Pilgrimage of Grace, Robert Aske, The Man on a Donkey