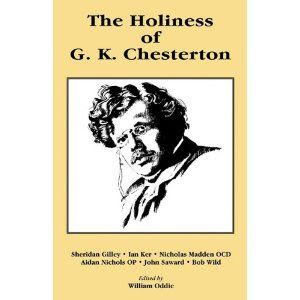 Gilbert Keith Chesterton died on June 14, 1936. William Oddie argues that GKC should be the next Englishman canonized a saint--as in this article from the Catholic Herald:

The obvious objection to this is that Chesterton was nothing like our idea of how a saint should look or behave. He was greatly given to the pleasures of the table; he was enormously, sometimes riotously funny; he was the opposite of Newman in so many respects (though Newman also had a brilliant sense of humour). The late Cardinal Emmet Carter described him on the 50th anniversary of his death as one of those “holy lay persons” who “have exercised a truly prophetic role within the Church and the world”, but he did not then believe that it would be possible to introduce a Cause for his ultimate canonisation, since he did “not think that we are sufficiently emancipated from certain concepts of sanctity” – though later he change his mind.

The distinguished historian J J Scarisbrick, however, thought that his sanctity was so clear that the opening of his Cause should indeed be seriously contemplated. “We all know,” he responded, “that he was an enormously good man as well as an enormous one. My point is that he was more than that. There was a special integrity and blamelessness about him, a special devotion to the good and to justice … Above all, there was that breathtaking, intuitive (almost angelic) possession of the Truth and awareness of the supernatural which only a truly holy person can enjoy. This was the gift of heroic intelligence and understanding – and of heroic prophecy. He was a giant, spiritually as well as physically. Has there ever been anyone quite like him in Catholic history?”

In the conclusion of this article, he mentions a book titled The Holiness of G.K. Chesterton. It is available in the USA now. In 2009 The Chesterton Society of the UK presented the conference of the same title from which the book was drawn, and William Oddie gave a presentation on the topic in which he introduced some guidance for discussing Chesterton's sanctity:

To begin at the beginning, how do we know a saint when we see one? Is there a checklist, that we can tick off? John Henry Newman once expressed his dislike of hagiographies which in his words ‘chop up a Saint into chapters of faith, hope and charity’. The danger, he thought, was the creation of a notion of sanctity which was somehow bland and conformist. He pointed out that the Saints of the early church ‘rather than writing formal doctrinal treatises…write controversy’. Not only that, they ‘mix up their own persons … with the didactic or polemical works which engaged them’. Newman could almost have been writing about himself; he could also have been describing someone as yet unborn: Chesterton, you will remember denied that he was a real novelist by saying that he ‘could not be a novelist; because I really like to see ideas or notions wrestling naked… and not dressed up in a masquerade as men and women. But I could be a journalist because I could not help being a controversialist.’

The saints of the early church too were controversialists; but though Newman disliked their being chopped up into chapters of faith, hope and charity, they could hardly have been saints without these cardinal virtues: indeed, they became controversialists because of them.

It is this before all else that we need to understand about Chesterton. He never flaunted his personal faith in his writings. . . .

[Yet]Chesterton’s intellect was entirely suffused by his faith; his heart was filled by a hope that welled up from his unfailing gratitude for the gift of life. As for his charity, we can say that Schopenhauer was one of the very few exceptions that prove the rule: nowhere in general do we see it more clearly than in his love for his intellectual opponents. He was, as I have said, like the saints of the early Church, a controversialist. He was a controversialist because he hated heresy: but he had an extraordinary capacity for loving the heretic: he might have come to love Schopenhauer if they had actually met, as he did frequently meet Shaw and Wells: he might even have cheered him up. In controversy, no matter how fierce, as Belloc wrote after his death, “...he seemed always to be in a mood not only of comprehension for his opponent but of admiration for some quality in him.... it was this in him which made him, with other qualities, so universally beloved.”

When he died, there were of course many epitaphs. Pius XI sent a telegram describing him as a "gifted defender of the Catholic Faith". But for most of those who loved him his true epitaph was that lovely verse written years before by the poet laureate, Walter de la Mare, which by the wish of his widow Frances appeared on the service sheet at his funeral Requiem Mass; it’s a verse I love to quote; and I cannot resist the temptation to end these opening remarks by quoting it now:

Knight of the Holy Ghost, he goes his way,
Wisdom his motley, Truth his loving jest;
The mills of Satan keep his lance in play,
Pity and innocence his heart at rest.
Posted by Stephanie A. Mann at 2:05 AM