The Carthusians in Newgate Begin to Die 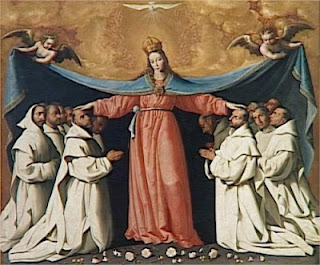 On June 6 in 1537, the slow agonizing deaths of the Carthusians held in Newgate Prison began with the laybrother, William Greenwood.  On June 8, deacon and choir monk John Davy died, on June 9 and 10, two more laybrothers, Robert Salt and Walter Pierson died, while choir monk Thomas Green died on the 10th--and then there is a gap until June 15.

What a sad duty their jailers had, checking each of the Carthusians daily for death from dehydration and starvation, taking one or two bodies away each day. The monks and laybrothers were bound to pillars, hand, foot and at the neck. As this website notes, they had survived for a time because of assistance from one of St. Thomas More's wards:

But Henry was bothered. He feared more rebellion from his intransigently Catholic people. Although he had not yet allowed the country to drift too far into heresy, the sensus catholicus of the people was outraged by his actions. He could not inflame such rage by another display of martyrdom. And so the Carthusians remained in Newgate. They remained, unfed and unattended. They were left to rot, and rot they did. Their names? John Davy, Thomas Green, Thomas Johnston and Richard Bere (choir monks) and William Greenwood, Robert Salt, Walter Peerson, Thomas Scryven, Thomas Reding, and Willam Horne (conversi, or brothers). Bound hand and foot, iron collars about their throats, they were chained to posts in a single cell and abandoned. Margaret Clement, the adopted daughter of St Thomas More, for a while managed to gain entrance to the cell (largely on account of the fact that her husband was physician to the King — and due to her disguise, as a milk-maid), and there fed them what food and water she could, and cleaned them for their own filth. This was discovered and she then attempted to find a way in from above, breaking through the roof of their cell and lowering food to their mouths. Eventually, too, this was not possible.

And so the good fathers and brothers died together in that dark and fetid place, one by one in prayerful silence, abandoned by Man but not by God. Greenwood, then Davy, then Salt; Peerson and Green upon the same day, mid-June; Scryven and Reding some days later. Somehow, Richard Bere (the nephew of a former Abbot of Glastonbury) survived until August 9th. Astonishingly, Thomas Johnson was still alive by September 20th, some sixteen weeks after his incarceration. He was removed to the Tower of London where he languished for a further two-and-a-half years before being martyred at Tyburn in the company of St Thomas More's son-in-law, Giles Heron, on 4th August 1540. These are all accounted Blessed by the Church. May they all pray for us who are unworthy of them.

The reason we know so much detail about their suffering at Newgate is that one of their fellow Carthusians, Maurice Chauncy, had taken the Oath of Supremacy and was still at large in England, although he soon went to Bruges.

Chauncy returned to England during the reign of Mary I and briefly revived the Carthusian Priory of Sheen, which had been surrendered in 1539. Upon Elizabeth I's accession, Chancy and the others fled to Louvain. Chauncy died on July 2, 1581, about age 72. He might have agreed with the line from Shakespeare's Julius Caesar: "Cowards die many times before their deaths;/The valiant never taste of death but once."
Posted by Stephanie A. Mann at 2:11 AM