The Carthusian Martyrs' Story in 1535, Continued 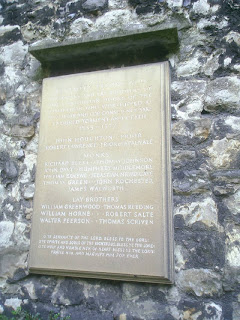 On June 19, 1535, the second group of Carthusians were executed: St. Humphrey Middlemore, St. William Exmew and St. Sebastian Newdigate. Arrested on May 25, they had been imprisoned in Marshalea for about a fortnight before their trial at Westminster on June 11. The three were taken before the Privy Council before their trial, refused again to swear Henry's oaths and were condemned to death. While in prison, they were chained at the neck and hand and foot against pillars, unable to move. Thus Sebastian Newdigate reportedly received Henry VIII, who offered him riches and preferment if he would swear the oaths. The outcome of the trial on June 11 was certain, of course, and they were found guilty of treason and sentenced to being hung, drawn and quartered at Tyburn. Reports indicate that they went to their deaths as to a feast, with eagerness and joy!

As I mentioned before on the post about St. Robert Southwell, in this case, it is rather difficult not to unleash an attack of opprobrium against Henry VIII, Thomas Cromwell and Thomas Bedyll.

You are Henry VIII, a powerful king and yet just a man. Can you imagine standing before a man you know (Sebastian Newdigate) bound to a pillar hand and foot? He is thirsty, hungry, and weak. Can you see yourself offering him freedom and honor if he does what you want him to do?

If you can, tremble.

Image source: a plaque near the site of the High Altar in the Charterhouse in London.
Posted by Stephanie A. Mann at 12:09 AM