The Five Wounds and the Sacred Heart 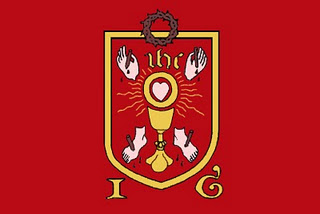 In 15th century England, the Friday following the Octave of the Feast of Corpus Christi was dedicated to the Five Wounds of Christ. Devotion to the Five Wounds of Christ, as I mentioned to Brian Patrick on the Son Rise Morning Show last week, is kind of a medieval precursor of devotion to the Sacred Heart of Jesus, which the Catholic Church celebrates today as a Solemnity. The Five Wounds are the piercing wounds to the hands, the feet, and side of Jesus on the cross.

As Eamon Duffy demonstrated in The Stripping of the Altars, this was a very popular devotion to the Passion of Christ in England before the Reformation. Through prayers and meditiations, the penitent recalled the suffering of Jesus on the cross and pleaded for the forgiveness of sins.

During the English Reformation, it developed a powerful symbolism beyond the devotion: Pilgrims opposed to the dissolution of the monasteries carried banners depicting the Five Wounds; Blessed Margaret Pole was attainted of treason because an emblem of the Five Wounds was found in her belongings so Thomas Cromwell argued that she favored the Pilgrimage of Grace. During the Northern Rebellion, the banners flew again, an obvious reference to that earlier rebellion--and a statement to Elizabethan regime that, the Act of Uniformity notwithstanding, some in England still wanted the old time religion of Catholicism.

The connection between the devotion to the Sacred Heart and the Five Wounds of Jesus is surely most clearly seen in the piercing of His Heart by the Roman soldier: "But when they came to Jesus and saw that he was already dead, they did not break his legs, but one soldier thrust his lance into his ide, and immediately blood and water flowed out." (John: 19:34). The blood and water were interpreted from early on in the Church's history as symbolic of the Sacraments of Baptism and the Eucharist, and as the life and spirit of the Church, itself a Sacrament of God's Grace. You might notice that the banner of the Five Wounds makes that connection very clearly, with the Heart and the Chalice at the center instead of a pierced heart.

More on the connection between the Solemnities celebrating the Most Holy Body and Blood of Jesus Christ (Corpus Christi) and the Most Sacred Heart of Jesus here.
Posted by Stephanie A. Mann at 2:01 AM