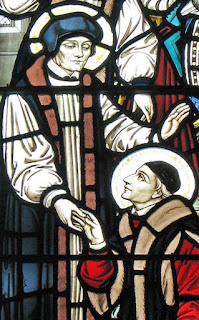 Today is the second day of the U.S. Bishops' "Fortnight for Freedom" and the Feast of St. John Fisher and St. Thomas More, martyrs, sharing the same feast day. St. John Fisher was executed on June 22, 1535, St. Thomas More on July 6, 1535. Both men's holiness was remarkable at the time of their living and yet they were not canonized until four hundred years later in 1935, on May 19 by Pope Pius XI. Without a free and established Catholicism in England, the deovtion and the cause for all the English martyrs took a long time to develop.

Pope Pius XI began his homily at the canonization Mass with the some historical context:

From time to time new heresies make their appearance and, under the guise of truth, gain strength and popularity; but the seamless garment of Christ can never be rent in twain. Unbelievers and enemies of the Catholic faith, blinded by presumption, may indeed constantly renew their violent attacks against the Christian name, but in wresting from the bosom of the militant Church those whom they put to death, they become the instruments of their martyrdom and of their heavenly glory. No less beautiful than true are the words of St. Leo the Great: “The religion of Christ, founded on the mystery of the Cross, cannot be destroyed by any sort of cruelty; persecutions do not weaken, they strengthen the Church. The field of the Lord is ever ripening with new harvests, while the grains shaken loose by the tempest take root and are multiplied.”

Speaking of the two martyrs, Pope Pius said that  St. John Fisher "was gifted by nature with a most gentle disposition, thoroughly versed in both sacred and profane lore, so distinguished himself among his contemporaries by his wisdom and his virtue that under the patronage of the King of England himself, he was elected Bishop of Rochester. In the fulfilment of this high office so ardent was he in his piety towards God, and in charity towards his neighbour, and so zealous in defending the integrity of Catholic doctrine, that his episcopal residence seemed rather a Church and a University for studies than a private dwelling." Of St. Thomas More he said, "he was no less distinguished for his desire of Christian perfection and his zeal for the salvation of souls. Of this we have testimony in the ardour of his prayer, in the fervour with which he recited, whenever he could, even the Canonical Hours, in the practice of those penances by which he kept his body in subjection, and finally in the numerous and renowned accomplishments of both the spoken and the written word which he achieved for the defence of the Catholic faith and for the safeguarding of Christian morality." The pope also took the opportunity to pray for the conversion of England:

We desire moreover that with your ardent prayers, invoking the patronage of the new Saints, you ask of the Lord that which is so dear to Our heart, namely that England, in the words of St. Paul, "meditating the happy consummation which crowned the life" of those two martyrs, may "follow them in their faith," and return to the Father’s house "in the unity of faith and of the knowledge of the Son of God."

More usually gets more attention, because of the A Man for All Seasons fame (which has its own pitfalls), but Fisher, with even deeper links to the Tudor family (preacher at the funerals of both Henry VIII's father and grandmother) and more consistent and open opposition to Henry's plans to take over the Church and push through his marital arrangement, is just as interesting. He was a humanist, a bishop, a serious defender of Church teaching, and an admired churchman in his lifetime. In his death he demonstrated the same dignity and holiness:

When he came out of the Tower, a summer morning's mist hung over the river, wreathing the buildings in a golden haze. Two of the Lieutenant's men carried him in a chair to the gate, and there they set him down, while waiting for the Sheriffs. The cardinal stood up and leaning his shoulder against a wall for support, opened the little New Testament he carried in his hand. "O Lord," he said, so that all could hear him, "this is the last time I shall ever open this book. Let some comforting place now chance to me whereby I, Thy poor servant, may glorify Thee in my last hour"----and looking down at the page, he read:

Now this is etemal life: that they may know Thee, the one true God, and Jesus Christ Whom Thou has sent I have glorified Thee on earth: I have finished the work which Thou gavest me to do (John, 17:3-4).

Whereupon he shut the book, saying: "Here is even learning enough for me to my life's end." His lips were moving in prayer, as they carried him to Tower Hill. And when they reached the scaffold, the rough men of his escort offered to help him up the ladder. But he smiled at them: "Nay, masters, now let me alone, ye shall see me go up to my death well enough myself; without help." And forthwith he began to climb, almost nimbly. As he reached the top the sun appeared from behind the clouds, and its light shone upon his face. He was heard to murmur some words from Psalm 33: Accedite ad eum, etilluminamim, et facies vestræ non confundentur. The masked headsman knelt----as the custom was----to ask his pardon. And again the cardinal's manliness dictated every word of his answer: "I forgive thee with all my heart, and I trust on Our Lord Thou shalt see me die even lustily." Then they stripped him of his gown and furred tippet, and he stood in his doublet and hose before the crowd which had gathered to see his death. A gasp of pity went up at the sight of his "long, lean, slender body, nothing in manner but skin and bones . . . the flesh clean wasted away; and a very image of death, and as one might say, death in a man's shape and using a man's voice." He was offered a final chance to save his life by acknowledging the royal supremacy, but the Saint turned to the crowd, and from the front of the scaffold, he spoke these words:

Christian people, I am come hither to die for the faith of Christ's Catholic Church, and I thank God hitherto my courage hath served me well thereto, so that yet hitherto I have not feared death; wherefore I desire you help me and assist me with your prayers, that at the very point and instant of my death's stroke, and in the very moment of my death, I then faint not in any point of the Catholic Faith for fear; and I pray God save the king and the realm, and hold His holy hand over it, and send the king a good counsel.

The power and resonance of his voice, the courage of his spirit triumphing over the obvious weakness of his body, amazed them all, and a murmur of admiration was still rustling the crowd when they saw him go down on his knees and begin to pray. They stood in awed silence while he said the Te Deum in praise of God, and the Psalm In Thee O Lord have I put my trust, the humble request for strength beyond his own. Then he signed to the executioner to bind his eyes. For a moment more he prayed, hands and heart raised to Heaven. Then he lay down and put his wasted neck upon the low block. The executioner, who had been standing back, took one quick step forward, raised his axe and with a single blow cut off his head. So copious a stream of blood poured from the neck that those present wondered how it could have come from so thin and wasted a frame. There was certainly Divine irony in the fact that 22 June, the date of the execution, was the Feast of St. Alban, the first Martyr for the Faith in Britain. If the king had realized this he would certainly have arranged for the execution of Cardinal Fisher to take place on another day.

Regarding that last sentence in Michael Davies' account of Fisher's death--Henry VIII had no good choice for a date since he was set on executing this good Cardinal Bishop: June 23 was the Vigil of and June 24 was the Feast of the Nativity of St. John the Baptist! Fisher had identified himself with St. John the Baptist explicitly [meaning that Henry VIII was Herod and Anne Boleyn was Herodias].

I will be on the Son Rise Morning Show from Sacred Heart Radio in Cincinnati broadcast on the EWTN radio network this morning to discuss this feast day, focusing on St. John Fisher and St. Thomas More in the context of this Fortnight for Freedom--at 7:45 a.m. Eastern/6:45 a.m. Central.
Posted by Stephanie A. Mann at 12:07 AM