Corpus Christi in England after Emancipation and Restoration 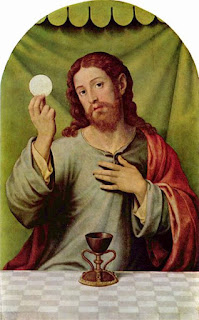 My first post today was about the Solemnity of Corpus Christi before the English Reformation, and I mentioned the first procession after the Reformation led by Blessed Dominic Barberi. With Emancipation in 1829 and the restoration of the hierarchy in 1850, devotion to the Most Holy Body and Blood of Christ became manifest in England again with churches (including Westminster Cathedral, which is dedicated to the Most Precious Blood) and processions.

The Parish of Maiden Lane is situated in the Westminster Deanery. It was founded in 1873 and consecrated on the 18th of October, 1956. Often referred to as the “hidden gem” of the West End, the then Archbishop Cardinal Henry Manning said during his homily at the opening mass that “a sanctuary has been opened to be specifically devoted to the Adoration of the Blessed Sacrament”.

This was the first church dedicated to the Blessed Sacrament after the Reformation. The famous hymns Sweet Sacrament Divine and O Sacred Heart were written by the parish priest Fr Francis Stanfield (1835-1914). It is also known as “the actors’ church” and is the home of the Catholic Association of the Performing Arts (formerly, the Catholic Stage Guild).

This link provides some pictures of the interior of the church, and here are the lyrics to the first hymn mentioned above:

This article describes the revival of the Corpus Christi procession in Arundel, home of the Dukes of Norfolk in Sussex. The Arundel Cathedral website has notes about the procession, which was celebrated on Thursday, June 7 this year.
Posted by Stephanie A. Mann at 2:26 AM