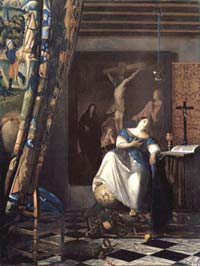 A collection of centuries-old skeletons excavated in Oxfordshire and stored in a museum are to be reburied as part of a "celebration" mass.

The human remains were found during the extension of a church graveyard in Eynsham, leading to excavations between 1989 and 1992.

Father Martin Flatman, of St Peter's Catholic Church, said he was pleased he could give them a "proper burial".

Six bodies are thought to be monks from the medieval Eynsham Abbey.

The remains of two women and a man have been dated to after the Reformation, and are believed to have been secretly buried in the consecrated ground.

The Catholic church was built on the site of the ancient abbey in the 1940s.

Father Flatman said: "Suddenly it dawned on me that I didn't know where the bodies were. I found out they were in the museum's storage and I applied to have them back.

"As a Catholic we honour the dead and we wouldn't want to leave them, particularly those faithful 16th and 17th Century Catholics who faced persecution."

The finding of those bodies at Eynsham Abbey is another demonstration of what Eamon Duffy indicated in his article in The Telegraph I posted yesterday: for too long, England has ignored its past. In burying those recusant faithful, Father Flatman is reminding England of a time when a Catholic was forced to conform to the national church at birth, at her marriage, and at death.

2)--This interview from Hilary Mantel in The Telegraph:

Mantel was raised a Roman Catholic and educated at convent school.

However, the 59-year-old writer said child abuse scandals involving Roman Catholic priests demonstrated the “cruelty” and “hypocrisy” of the church.

Asked if she would call for a priest on her deathbed, Mantel replied: “No. I might very well call for a Church of England vicar, but I would not call for a Catholic priest.

“I’m one of nature’s Protestants. I should never have been brought up as a Catholic. I think that nowadays the Catholic Church is not an institution for respectable people.”

Which reminds me of the Oscar Wilde comment, "The Catholic Church is for saints and sinners alone. For respectable people, the Anglican Church will do." (Remember that Oscar Wilde became a Catholic on his deathbed.) Francis Phillips responded here in The Catholic Herald. Mantel may think she was being remarkably current and astute ("nowadays") in her comment, but she is ignoring the past five hundred years in England, too--not to mention the Gospel stories of Jesus dining with tax collectors and publicans--they weren't respectable either. For a literate and learned person, she made a most illiterate and ignorant statement.

3)--This story from Maryland:

The Rev. Edward Meeks and his flock attended to a "million and one details" last week in the run-up to a momentous day for their church. People to talk to. Flowers to arrange. Food to cook. And, of course, the new sign. On Sunday, Christ the King Church — Anglican — became Christ the King Catholic Church. The Towson congregation of about 140 is one of the first groups in the United States to join a new "ordinariate" established for those who want to be Catholic but hold on to Anglican traditions. The largest Anglican church in the country to do so, it follows in the footsteps of Mount Calvary Church in Baltimore and St. Luke's Parish in Bladensburg.

Liberal stances by Anglican leaders, particularly Episcopalians, have driven some clergy and members to the Roman Catholic Church. But Meeks, who studied to become a Catholic priest as a young man, speaks not of rejection but of reunification — becoming one with the "authentic apostolic authority" of the church that dates back 2,000 years.

"We're just overjoyed by this," said the Rev. Msgr. Jeffrey Steenson, who heads the U.S. ordinariate, the equivalent of a diocese but national in scope. As parishioners of all ages scurried past to take their seats for the Mass, he added, "It's such a healthy community — you can see it's full of children."

The parishioners who became Catholics Sunday morning were joining the church for the first time or returning after years apart. A handful of parishioners haven't decided whether to make that leap, though they're remaining in the congregation.

Others left. The 140-member church had about 200 parishioners when it started down the road to Catholicism almost two years ago, losing both those who didn't want to be Catholic and those who opted for a more traditionally Catholic experience.

That loss has been painful, parishioners say. But they add that the transformation from Protestant to Catholic has not been acrimonious — in contrast to the roiling discontent that produced the Church of England more than 450 years ago and that spawned Anglican churches around the world. Some parishioners who went elsewhere return for social events.

"We've still got a good relationship with virtually all who have left," Meeks said.


and 4)--This story, also from The Telegraph from a few months back, about the community left behind by the Anglican Ordinariate:

Members of the congregation at St Michael and All Angels parish church in Croydon, south London, don’t ask for much. A decent sermon, perhaps a few rousing hymns; clean pews; a tidy garden at the back; someone to help with Sunday school. But this month, they need something rather more important: a new vicar, to replace the one who converted to Catholicism and took 69 of his flock with him to a church up the road.

A “Parish priest: vacant” sign now stands outside the towering red-brick church behind West Croydon train station. Seven weeks ago, it housed 100 parishioners and a vicar who had served there for 16 years. Today, St Michael’s has less than half its original congregation, after the Rev Donald Minchew quit his post and was received into the Catholic faith at St Mary’s, 500 yards away.

This extraordinary leap of faith was prompted by the Rev Minchew’s decision to join the Ordinariate, a structure within the Roman Catholic Church that allows Anglicans to enter into full communion while retaining some of their C of E heritage. The practice started last January, when three former Anglican bishops were ordained as Catholic priests, following a decree from Pope Benedict XVI to heal division between the faiths. Since then, dissatisfaction with aspects of Anglican doctrine – including the Church’s attitude towards homosexuality and its willingness to consider female bishops – has led hundreds to take up the offer of conversion.

The Rev Minchew’s reasons for leaving St Michael’s were rooted in his doubts about the Anglican faith. “In the Church of England, you don’t know what the Church believes from one synod to the next,” he said. “I think there is great comfort in the Catholic church: you know what you believe and what the Church teaches.”

But what of those he left behind? St Michael’s is one of many Anglican parishes for which the Ordinariate has meant empty pews, an interregnum and a gaping hole in church life for the congregation.
Posted by Stephanie A. Mann at 12:13 AM