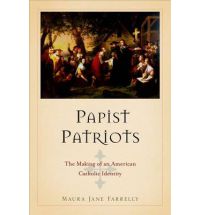 To conclude my long review and analysis of Maura Jane Farrelly's Papist Patriots, I pick up at the middle of the book, with the fourth chapter:

Chapter 4, “Catholic Commitment in an Inhospitable Climate” is crucial for Farrelly’s second argument or purpose in this book, to demonstrate that Catholic laity developed a cisalpine attitude toward the Catholic Church hierarchy. She introduces that term in the Introduction, noting that Catholics in England, in attempting to prove their trustworthiness and loyalty to their nation and their king, sometimes expressed limitations on the temporal authority of the pope. In Chapter 1 she also addresses the divisions between Catholics, particularly between the Jesuits and the seminary clergy, about whether one could swear James I’s Oath of Allegiance. As the Society of Jesus was founded with obedience to the pope as a central purpose, they said Catholics couldn’t. Others, called the Appellants, even at the end of Queen Elizabeth’s reign, tried to argue that they could be loyal to both the Queen and the Pope, appealing to divisions between spiritual and temporal authority. What Farrelly tries to do in this chapter is extend that cisalpine spirit to issues of doctrine, devotion, and discipline, creating a conflict between the laity and the (mostly) Jesuit clergy in Maryland in the eighteenth century.

I think this attempt fails, partially because, reading it as a Catholic, I immediately noticed that Farrelly does not use the correct Catholic vocabulary when discussing devotions and the Sacraments. She refers to limited access to the Sacrament of Confession, for instance, by saying that the laity could not regularly “give their Confession”—that’s not what Catholics do: we “confess our sins”. Farrelly states that “The Church told Catholics that the Eucharist was a Sacrament and as such, it must be venerated.” The correct term for Catholics’ response to the Eucharist, the Real Presence of Jesus, is worship and adoration, not veneration. Latria, worship and adoration, is offered only to God; dulia (or hyper-dulia for the Blessed Virgin Mary) is the veneration Catholics offer saints. Furthermore, Farrelly tries to develop a conflict between the Eucharistic devotion Catholics in Maryland practiced in sodalities and the veneration (sic)—worship of the Mass and reception of Holy Communion. That does not work, especially since by the eighteenth century, Eucharistic adoration outside of Mass was a regular part of devotions throughout Catholic Europe. She sets up a control issue between laity and clergy, stating that the clergy tried to control the laity by encouraging certain devotions. Nathan Mitchell’s The Mystery of the Rosary: Marian Devotion and the Re-invention of Catholicism argues the opposite—that the development of Marian devotions, for example, demonstrates that Early Modern Catholicism offered the laity a great variety of spiritualities and prayers.

Farrelly also undercuts her own argument by showing how flexible the Jesuits were in addressing practical issues among the laity in the inhospitable climate of eighteenth century Maryland—dispensing them from fasts during particularly hard winter Lents, allowing work on Sunday during harvest, and understanding certain family issues on Fridays (not forcing Protestant servants or family members to abstain from meat). She even notes that the Jesuits serving in England would not permit these kinds of variations from Catholic disciplines and teaching—and they were in the same dependent circumstances, supported by and living with Catholic nobility. Certainly Catholic priests could not dispense Catholics from their Sunday obligation in usual circumstances, because Sunday worship is an indispensable part of being Catholic. And certainly Farrelly notes that Catholics often demonstrated their devotion to their faith, even choosing distinctly Catholic names for their children.

In chapters 5 and 6, Farrelly is back on surer historical footing. She analyzes different aspects of Anti-Catholicism in Anglican Maryland, as issues of English identity and a kind of knee-jerk reaction to the idea of Catholicism that exempted individual Catholics from condemnation. The exile of Jacobite rebels from Scotland after the Pretenders’ attempts in 1715 and 1745 revived fears of Catholics plotting against king and country and increased the tensions between Anglicans and Catholics, but Chapter 5 lives up to its title, “The Inconsistency of Intolerance.”

In Chapter 6, “Papists Become Patriots,” Farrelly continues to investigate the Carroll family, focusing of course on Charles Carroll of Carrollton and his efforts, again, to prove to the other Founding Fathers that Catholics could be loyal and true allies in the cause of independence. She covers the anti-Catholic reaction to The Quebec Act, by which King George III and his government, recognizing that the vast majority of the inhabitants of Quebec were Catholic, allowed the free practice of Catholicism there. Farrelly notes that the American colonists’ reaction to the Quebec Act was “overwrought” because George III did not establish the Catholicism as the official Church of Quebec--the Church received no funding, for example. But officials did not have to deny Transubstantiation in their Oath and citizens did not pay taxes to support the Church of England’s presence in Quebec. To those who wanted independence, The Quebec Act was another argument against the tyranny of England.

When His Most Christian (Catholic) Majesty, the King of France, Louis XVI sent troops and money to the revolutionary army, American patriots had to think about this seeming contradiction—they associated Catholicism with tyranny and yet here were Catholics helping them fight against tyranny! George Washington forbade the burning of the Pope in effigy on the Fifth of November: things were changing. Although the mission failed, Charles Carroll of Carrollton and his cousin, Father John Carroll, SJ (the Society of Jesus had been suppressed by the Holy See) went on a diplomatic mission to Montreal with Benjamin Franklin. Catholics could be trusted, after all.

Farrelly ends her history with the 1776 Constitution of Maryland, to which Charles Carroll, the only Catholic signer of the Declaration of Independence contributed. It disestablished the Church of England in Maryland and established freedom of religion for Catholics, and others. She summarizes her work by hinting at the shifts in “American Catholic identity” that would come as Irish, Italian, and German Catholic immigrants changed the difference expressions of Catholicism in the coming centuries. On balance, this is an intelligent and well-narrated view of this crucial experiment in religious liberty and its effects on American independence, with one weak effort to bolster part of the author’s argument with a faux conflict between laity and clergy over Eucharistic adoration and Church discipline.
Posted by Stephanie A. Mann at 2:02 AM