Something Else About Mary 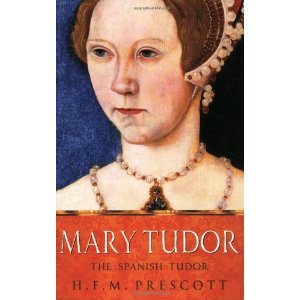 Katherine of Aragon and Henry VIII's daughter, that is. As I read H.F.M. Prescott's The Man on a Donkey, I noticed the rich insight Prescott had into Mary's mental state as she signed the documents accepting her new position in her father's Court in 1536. We should remember the Prescott was also Mary I's biographer--until the recent outpouring of biographies, it was the standard life, having won the James Tait Black Prize in 1941.

As Prescott depicts her during two scenes, one when she signs the documents and the other when she is presented again to her father at Court, Mary knows exactly how horribly she has betrayed the memory of her mother and the Catholic Church--yet feels she has no choice. She obtains no true reconciliation with her father either, as he receives her without any joy or welcome--he just needs an heir he can control and trust until his third marriage bears fruit. The timing of this episode has always been interesting to me: Katherine of Aragon has died; Anne Boleyn has been executed, baby Elizabeth downgraded to bastard too, Henry has remarried, and Henry VIII requires his elder daughter to: 1) recognize him as the Supreme Head and Governor of the Ecclesiae Anglicanae; 2) repudiate papal authority; 3) acknowledge her parents' marriage was unlawful; and 4) accept her own illegitimacy. Why? --and why didn't he ever present the same list of conditions to Elizabeth as she grew up and was brought into the line of succession? Except for the second item, the others would definitely seem appropriate for Elizabeth to acknowledge if Henry thought this was necessary for Mary.

Prescott shows Mary's extreme lethargy as the physical manifestation of her reluctance as she sits at Hunsdon late at night with all the papers, pen and ink in front of her. She remembers the physical threats of the Duke of Norfolk--to bash her head up against the wall. She had pleaded for some acknowledgment of her rights of conscience and God's law, but there was only Henry's law. He wanted her accept that everything he had done was true and just. Remember that everything he had done thus far had not achieved his goal of a legitimate male heir. The Spanish Ambassador urged her to sign the document, hoping for her survival. Although she knew the ends did not justify the means, she signed it and bitterly, bitterly regretted it.

These are the statements of those four points listed above, as drafted by Thomas Cromwell:

First I confess and acknowledge the king's majesty to be my sovereign lord and king, in the imperial crown of this realm of England; and do submit myself to his highness and to each and every law and statute of this realm, as it becomes a true and faithful subject to do; which I shall also obey, keep, observe, advance and maintain according to my bounden duty with all the power, force and qualities with which God had endued me, during my life.
I do recognize, accept, take, repute and acknowledge the king's highness to be supreme head on earth, under Christ, of the church of England; and do utterly refuse the bishop of Rome's pretended authority, power and jurisdiction within this realm, formerly usurped, according to the laws and statutes made on that behalf, and by all the king's true subjects humbly received, admitted, obeyed, kept and observed.
And I do also utterly renounce and forsake all manner of remedy, interest and advantage which I may by any means claim by the bishop of Rome's laws, processes, jurisdiction or sentence, at this time or in any way hereafter, by any manner of title, colour, means or cause that is, shall or can be devised for that purpose.
I do freely, frankly and for the discharge of my duty towards God, the king's highness and his laws, without other respect, recognize and acknowledge that the marriage formerly had between his majesty and my mother, the late princess dowager, was by God's law and man's law incestuous and unlawful.

She also wrote a letter expressing her hopes for reconciliation with her father:

Most humbly, therefore, beseeching your mercy, most gracious sovereign lord and benign father, to have pity and compassion of your miserable and sorrowful child, and with the abundance of your inestimable goodness so to overcome mine iniquity towards God, your grace, and your whole realm, as I may feel some sensible token of reconciliation, which, God is my judge, I only desire, without any respect: to whom I shall daily pray for the preservation of your highness, with the queen's grace, and that it may please Him to send you issue.

From Hunsdon, this Thursday,* at eleven of the clock at night.

Your grace's most humble and obedient daughter and handmaid,

What if she hadn't signed the documents? Would Henry VIII have ordered her execution?
Posted by Stephanie A. Mann at 2:03 AM

Email ThisBlogThis!Share to TwitterShare to FacebookShare to Pinterest
Labels: H.F.M. Prescott, Henry VIII, Katherine of Aragon, Mary I, The Man on a Donkey, Thomas Cromwell