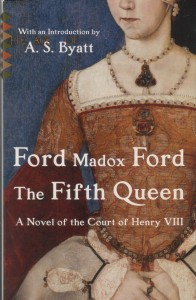 The English author Ford Madox Ford died on June 26, 1939. He is best known for his novel, The Good Soldier and The Fifth Queen, a historical novel about Katherine Howard, Henry VIII's fifth wife, whom he had beheaded for infidelity. He became Catholic when a teenager. Ford worked with Joseph Conrad on several works (The Shifting of the Fire, for example), and collaborated with other authors as he edited the English Review.

Ralph McInerny offers this overview of Ford's life and achievements.

The pretty re-issue of Ford Madox Ford’s great “Fifth Queen” trilogy of slim novels, written between 1906 and 1908, conform to no anniversary except the hope of money: Hilary Mantel’s Wolf Hall is a rising tide that might well float a few Tudor galleons, and it shares with Ford that most memorable character, Thomas Cromwell. The Cromwell stalking through both Mantel’s book and Ford’s trilogy (collected by Vintage – same as by Ecco back in 1986) is much the same man – blunt yet cunning, brutal yet sensitive, and possessing a clearer eye for absolute rule than the corpulent king he serves:

‘God is above us all,’ he answered. ‘But there is no room for two heads of a State, and in a State is room but for one army. I will have my King so strong that no Pope no priest no noble no people shall here have speech or power. So it is now; I have so made it, the King helping me. Before I came this was a distracted State; the King’s writ ran not in the east, not in the west, not in the north, and hardly in the south parts. Now no lord nor no bishop nor no Pope raises head against him here. And, God willing, in all the world no prince shall stand but by the grace of this King’s Highness. This land shall have the wealth of all the world; this King shall guide this land. There shall be rich husbandmen paying no toll to priests, but to the King alone; there shall be wealthy merchants paying no tax to any prince nor emperor, but only to this King. The King’s court shall redress all wrongs; the King’s voice shall be omnipotent in the council of the princes.’

Seems a little odd that the Vintage cover should depict the Princess Mary, Henry VIII and Catherine of Aragon's daughter--but then, there are no reliable portraits of Henry VIII's fifth queen.
Posted by Stephanie A. Mann at 12:10 AM