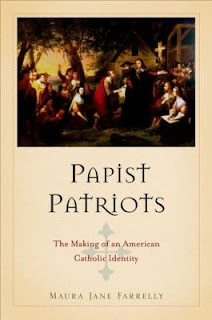 I've written a rather long review and analysis of this book, so I've divided it into two posts: Part One covers the Introduction and  first three chapters:

Maura Jane Farrelly sets out to explore the only Catholic colony authorized by the Stuart monarchs in New England, Maryland, and its history’s effect on Catholics in Revolutionary America. Part of her purpose is to examine the issues of religious freedom and tolerance in Maryland before and after the fall of the Catholic Lords Baltimore, the Calvert fathers and sons who served as governors before the Glorious Revolution of 1688. The other argument she wants to make is that Maryland Catholics developed an independence from both English government and Church hierarchy control that prepared them to support the independence movement, even though they were not particularly welcomed by other founding fathers.

She succeeds completely with the first point, in my opinion. Tracing the legacy of English persecution of Catholics from the reign of Elizabeth I through to the strategies Catholic gentry and nobility developed to continue the practice of their faith, Farrelly aptly summarizes the history of the late sixteenth and early seventeenth centuries in chapter 1, “The English Origins of American Catholicism”. She may be a little biased against the Jesuit mission in England, pointing out the limitations of its coverage throughout the country, and commenting on the relative ease of Jesuit priests living with noble Catholic families. I wonder about “relative ease” when the danger of discovery, arrest, imprisonment, and brutal execution was always present, since the priests’ very presence in England was considered not just illegal but treasonous. Father Robert Scully’s Into the Lion’s Den: The Jesuit Mission in Elizabethan England and Wales, 1580 to 1603 addresses this particular issue with more balanced and measured fairness. Nevertheless, the first chapter sets up the context of George Calvert’s life and career.

Chapters 2 and 3 recount the story of the Lords Baltimore and their efforts to found a colony in New England where Catholics would be free to practice their faith and priests would be able to serve them without fear of exile or death. George Calvert, the First Lord Baltimore (given that title by King James I) was a Catholic revert, having conformed to the established Church of England as a young lad of 12 when Yorkshire officials meddled in his education and his parents’ recusancy. John D. Krugler’s English and Catholic: The Lords Baltimore in the Seventeenth Century is a great resource to these chapters, as Farrelly addresses the difficulties, successes and failures of religious toleration in Maryland, the second colony George Calvert managed to have approved before his death. (He first travelled to found Avalon in Canada, but found the climate and terrain inhospitable). She points out the dual purpose of the Maryland colony: making money and experimenting with religious liberty. Calvert’s heir, Cecil, or Cecilius as he became after his conversion to Catholicism, really managed—from a distance and with some trial and error—to find the balance his father had sought. Catholics were to be free to be in Maryland, but they were neither the majority nor the favored group in the colony. George Calvert had invited Jesuits priests to serve the Catholics and to be missionaries to the Native American Indians, but Cecilius Calvert had to work with the Jesuits to temper their enthusiasm for missionary efforts and make sure they were serving the Catholics. Catholics were to be free, but not to take such advantage of that freedom to oppress the Anglicans, who were the majority. Proselytizing was a delicate matter and although the Act of Toleration in Maryland codified religious liberty, it limited freedom of speech. Certain words were not to be spoken: the Calverts expected both tolerance and civility. Cecilius Calvert, the 2nd Lord Baltimore left the colony to his heir, Charles Calvert, who had been raised as a Catholic and was not as balanced and politique as his father.

But Farrelly also pays adequate attention to affairs in England, like the Civil War, the Interregnum, the Restoration of the Monarchy, and finally, the Glorious Revolution. The fortunes of the Calverts in Maryland—and of religious freedom—rose and fell with those events. The final fall came with the invasion of England by the Dutch, the deposition of the Catholic King James II, and the reign of William and Mary, the ultimate establishment of the Church of England in Maryland and the end of toleration for Catholics in their own colony.

Part Two tomorrow will cover the last three chapters of this interesting and important study of Maryland's contribution to religious liberty in the United States of America.
Posted by Stephanie A. Mann at 2:10 AM