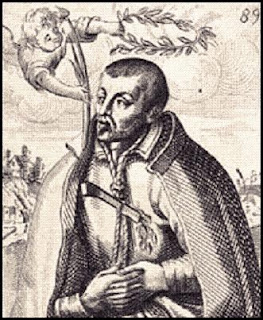 According to the Catholic Encyclopedia, Father Nathaniel Bacon adopted the alias of Southwell, I would presume in homage to the great Jesuit poet and martyr, Saint Robert Southwell (thus the portrait). Father Bacon, alias Southwell, died in Rome on December 2, 1676:Better known under the assumed name of Southwell, a Jesuit priest and bibliographer, b. in the county of Norfolk, England, in 1598; d. at Rome, 2 Dec., 1676. He received his early training at St. Omers, entered the English College at Rome in 1617, and after his ordination to the priesthood in 1622 was sent to labor on the English missions. Two years later he entered the Jesuit novitiate, but shortly after was transferred to the Roman province, where he discharged the duties of procurator and minister of the English College. Appointed in 1647 Secretary to the General of the Society of Jesus, Father Vincent Caraffa, he displayed such talent for business that he was retained as Secretary by the four succeeding Generals of the Order. Upon his retirement from this office in 1668, he began the well-known "Bibliotheca Scriptorum Societatis Jesu" in folio, published in Rome in 1676. This compilation was based on an earlier work of Father Ribadineira, issued in 1602 and brought down to 1641 by Father Alegambe. Father Southwell revised the original works, adding copious notes of his own. Dr. Oliver praises this volume as "a compilation truly admirable for research, accuracy, elegance of language, piety, and charity of sentiment." Father Southwell was also the author of "A Journal of Meditations for Every Day of the Year" published in London in 1669. On the same authority we learn that he was accounted by his religious brethren a model of virtue and sanctity. He died in the professed house of the Gesu, at Rome.
The Benedictus monthly prayer book, offering the very convenient feature of each Sunday Mass in Latin and English according to the 1962 Roman Missal without having to flip from one part of a hand Missal to another (from the Propers to the Ordinary of the Mass), has been featuring daily meditations from Father Bacon, alias Southwell.
By the way, another Nathaniel Bacon died in 1676: He was the leader of Bacon's Rebellion against the English governor, Sir William Berkeley. He died of dysentery on October 26 that year.
Posted by Stephanie A. Mann at 12:00 AM