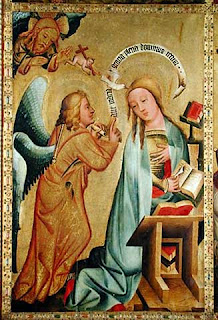 On the First Saturday of December (12/4), the Saturday of the First Week of Advent, I attended an early morning Mass, a "Rorate Caeli" Mass in the Extraordinary Form of the Latin Rite. It was celebrated by candlelight, with candles only illuminating the darkness of the church. Candles on the Altar and the side altars, candles on window ledges beneath each stained glass window, candles--lit just before Mass began--held by the members of the congregation. It was a Votive Mass of Our Lady in Advent and is called the "Rorate Caeli Mass" because of the first words of the Introit of the Mass:Roráte caéli désuper, et núbes plúant jústum. (Drop down, ye heavens, from above, and let the skies pour down righteousness.) (Isaiah 45:8)
During this Ember Week in the Extraordinary Form of the Latin Rite according to the Roman Missal of 1962, this Wednesday was the Ember Wednesday of the Advent Season, and was also a "Rorate Caeli" Mass, celebrating the Incarnation of Christ Our Lord by the power of the Holy Spirit in the womb of Mary, the Blessed Virgin: the Annunciation.
The "Rorate Caeli" antiphon is also used in Advent Prose, as the Cantica Sacra website explains:
The complete text is assembled with passages from different chapters by the prophet Isaiah. When sung in a liturgical setting, the first two lines of the text are often treated as an antiphon: the passage is chanted at the beginning and end of the entire text and at the end of each stanza by the entire choir and congregation.
The first verse of the Advent Prose is also from the Book of the Prophet Isaiah:
Ne irascaris, Domine, satis
et ne ultra memineris iniquitatis nostrae.
Ecce, respice, populus tuus omnes nos.

(Be not angry, O Lord,nor remember our iniquity forever.
Behold, look upon us, we are all thy people.

Thy holy cities are deserted.
Zion has become a wasteland,
Jerusalem a desolation.) (Isaiah 64:9-10)
This is the text of one of William Byrd's famous motets, which is often seen as reflection of the status of Catholics in Elizabethan England and was published in his 1589 Cantiones Sacrae.
As this article by Richard Evidon on the Schubert Club website analyses Byrd's setting of this text:
This is a double motet, composed of two symmetrical parts. Part I, the exiles’ plea for divine mercy, begins with the lower voices darkly intoning “Ne irascaris, Domine, satis” (“Be not angry, O Lord”), a calming phrase that moves into the upper voices and then is taken up by all five vocal parts. After another set of supplicating entries on the words “Et ne ultra memineris iniquitatis nostrae” (“Nor remember our iniquity forever”), the musical flow comes to a stop. What follows is a chordal appeal to the Lord – “Ecce, respice” (“Behold, look upon us”) – with a change in tone and texture that quietly yet dramatically conveys the captives’ sense of being abandoned. But the real center of gravity – in both parts of the motet – comes in a concluding, greatly extended contrapuntal phrase. Here it’s a long set of imitative entries on the text “Populus tuus omnes nos” (“We are all thy people”) that builds up in pitch, texture and intensity to depict the anguishing multitudes. . . .
Please read the rest there, including his analysis of the second part of the motet. Evidon recommends this performance by VOCES8, licensed by the group for publication.
The Catholic Encyclopedia includes this comment at the end of its article by Joseph Otten on William Byrd:
Two of his motets, "Domine, ne irascaris" and "Civitas sancti tui", with English texts, are in the repertoire of most Anglican cathedrals. In spite of the harrowing religious conditions under which he lived, in the reigns of Queen Elizabeth and James I, Byrd remained faithful to his principles and duties as a Catholic, as is shown in his life and by his works. In his last will and testament he prays "that he may live and dye a true and perfect member of the Holy Catholike Churche withoute which I beleeve there is noe salvacon for me".
Posted by Stephanie A. Mann at 12:00 AM