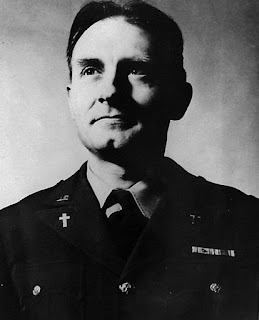 Visiting one of our local bookstores, I glimpsed the cover of The Journal, a quarterly publication of the Kansas Leadership Center. The cover story for the Fall 2021 issue is "Making a Home for Father Kapaun" featuring a picture from the pilgrimage to Pilsen, Kansas, Servant of God Emil Kapaun's home town.
In March of this year, the U.S. Defense POW/MIA Accounting Agency, (the DPAA) announced that Father Kapaun's remains had been identified in the National Cemetery of the Pacific in Hawaii. This meant that his remains could be returned home, that a Funeral Mass could be offered for him, and that he could be buried at home after his death 70 years ago.
But the question was, where at home? In Pilsen, Kansas, a small community in Marion County, where his memory has been celebrated through the decades? The family, led by his nephew Ray Kapaun, decided with Bishop Carl Kemme of the Diocese of Wichita, that he would be at least temporarily interred in the Cathedral of the Immaculate Conception in Wichita. His cause for canonization is still in process in Rome--in 2020, just before COVID struck, there was a meeting scheduled at the Congregation of Saints to perhaps declare him Venerable and it has not been rescheduled.
The article points out many of the challenges the Pilsen and Marion County community and officials face if his cause does proceed and the required miracles for his beatification and canonization are accepted. The main issues are transportation, accommodations, and other services for pilgrims if his shrine is to be located in Pilsen:

The Marion County Commission has hired a consultant to explore how to best prepare for the increase in tourists. That includes working with state officials and recruiting hotel developers, commissioner David Mueller says.

Because Pilsen Road is a county road, it is not the responsibility of the Kansas Department of Transportation, says agency spokesman Tom Hein. Mueller and others wonder if surging traffic volumes may prompt a change to state maintenance.

State officials say they’re monitoring the situation in Marion County, but Mueller acknowledges local authorities are frustrated by what feels like a lack of support.

“I wouldn’t say we’re in over our head” in Marion County, he says. “We’re doing everything we can to prepare. It’s just hard to know how much to do, and what route is best.”

At the same, the residents of Pilsen want their little town to remain their community. And some are disappointed that his remains aren't there already, although that was a decision of the family:

“They’re not ready,” says Ray Kapaun, Emil’s nephew, who lives on Whidbey Island in the state of Washington. “They’re not even going to be ready for what’s going to hit them to start with, even with his remains not being out there.”

The decision to place the potential saint’s remains in Wichita, an hour away, rankles residents of Pilsen.

“They said security wasn’t so good out here,” says Kathy Svitak, whose farmstead carries traffic for those who depart Pilsen’s little cemetery via the rear exit. “Well, I guarantee there’s a lot more crime around the Wichita church than there is out here. And we can put the same safe codes they could do. We just have not been given the choice of the chance.”

Reading the article reminded me that like so many things in the history of the Catholic Church, the Divine and the human mix in such mysterious ways. There's God's timing, providence, and wisdom, and there's our efforts to plan, control, and prepare. God's providence is more powerful than our efforts, we should know by now. The people of Pilsen may not be able to guarantee that their community will stay the same if Servant of God Emil Kapaun is raised to the honors of the Altar: he would be just the fourth saint from the USA and only the second saint to have lived in Kansas (Saint Rose Philippine Duchesne lived among the Potawatomi at Sugar Creek near Mound City, Kansas in 1842).
As I attend daily Mass a few times a week at the Cathedral of the Immaculate Conception in Wichita, which has always been well-attended by a group of a familiar faithful, I've seen the pilgrims coming to pray at his tomb. Volunteers staff an information desk, and tours (not during Mass) may be arranged. The official website for Father Kapaun includes guidance for arranging tours at the museum and church in Pilsen (the museum is not handicap accessible). The Cathedral website for visits and tours also highlights the other Wichita location connected to Father Kapaun, my high school alma mater Kapaun-Mount Carmel as well as the Pilsen destination, so it seems like we're doing the best we can now to maintain this delicate balance of God's Will and our efforts to submit to it. History shows us that the process of Canonization can take centuries; we're still dealing with decades!!
Chaplain Kapaun, pray for us!
Image Credit (public domain): Unknown author - U.S. Army Chaplain Center and School
Posted by Stephanie A. Mann at 12:00 AM

Email ThisBlogThis!Share to TwitterShare to FacebookShare to Pinterest
Labels: Kansas Leadership Center, Kapaun’s tomb, Pilsen and Wichita, Saints and shrines, Servant of God Emil Kapaun, the Cathedral of the Immaculate Conception, The Journal