Today in Westminster: The Holy Martyrs of Douai 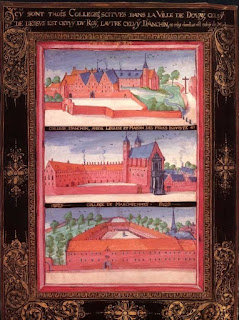 Today, the Diocese of Westminster, London celebrates the feast of the Douai Martyrs--that is, martyrs who studied at the English College/seminary in Douai during the sixteenth and seventeenth centuries--who have been beatified and canonized. From St. Cuthbert Mayne, the protomartyr, to Blessed Thomas Thwing, a Popish Plot martyr, they suffered and died for the Catholic Faith and to serve the Catholic laity starting in 1577 and ending in 1679--102 years, from the reign of Elizabeth I to the reign of Charles II!
At 10:00 a.m. British Summer Time (4:00 a.m. Central Daylight Time) St Alban & St Stephen Roman Catholic Church will livestream the Mass celebrating this feast. (The parish has a YouTube channel so you should be able to watch the Mass at a time convenient for you.)
A couple of years ago I purchased the Baronius Press version of the 1962 Roman Missal: The Daily Missal and Liturgical Missal, Summorum Pontificum edition because it includes:
I have not used it at Mass (I am used to the Angelus Press Roman Missal) but reference it for that supplement and the many prayers it also contains. In this Missal, the Collect is:
Excite in us, O Lord, that Spirit which Thy blessed Martyrs of Douai obeyed: that we, filled with the same Spirit, may ourselves endeavour to love what they cherished, and to practice what they taught. Through Our Lord Jesus Christ . . .  Amen.
The other Propers are the same as for the Mass of the Blessed Martyrs of England and Wales on May 4, except for the Gospel, which is from the Mass of Many Martyrs, Salus Autem (Luke 12, 1-8)
Blessed Martyrs of Douai, pray for us!
Image Credit: the Colleges at Douai (the English College is on the top), Adrien de Montigny (?–1615)[2] - From Les Collèges à Douai of the Album of Duke Charles of Croy. (Public Domain)
Posted by Stephanie A. Mann at 12:00 AM