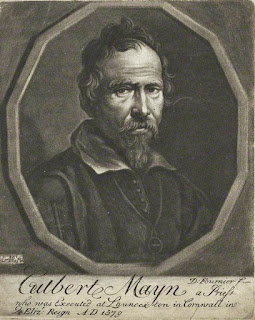 St. Cuthbert Mayne is the protomartyr of the seminary priests trained on the Continent who returned to England as missionaries. He was executed--hanged, drawn, and quartered--on November 30, 1577 on rather flimsy evidence, there being no laws yet against Catholic priests entering the country (that is that they weren't automatically traitors by being present in the country having been ordained abroad). According to the Catholic Encyclopedia entry, written before he was canonized among the 40 Martyrs of England and Wales by Pope Paul VI:

He was ordained in 1575 and came to England with St. John Payne (Payne and Mayne!) in 1576. When Father Cuthbert Mayne was arrested in June, 1577, authorities had some trouble in gathering evidence that corresponded with charges punishable by death:

He was brought to trial in September; meanwhile his imprisonment was of the harshest order. His indictment under statutes of 1 and 13 Elizabeth was under five counts: first, that he had obtained from the Roman See a "faculty", containing absolution of the queen's subjects; second, that he had published the same at Golden; third, that he had taught the ecclesiastical authority of the pope in Launceston Gaol; fourth, that he had brought into the kingdom an Agnus Dei and had delivered the same to Mr. Tregian; fifth, that he had said Mass.

Nevertheless the jury found him guilty of high treason on all counts, and he was sentenced accordingly. His execution was delayed because one of the judges, Jeffries, altered his mind after sentence and sent a report to the Privy Council. They submitted the case to the whole Bench of Judges, which was inclined to Jeffries's view. Nevertheless, for motives of policy, the Council ordered the execution to proceed. On the night of 27 November his cell was seen by the other prisoners to be full of a strange bright light. The details of his martyrdom must be sought in the works hereinafter cited. It is enough to say that all agree that he was insensible, or almost so, when he was disembowelled. 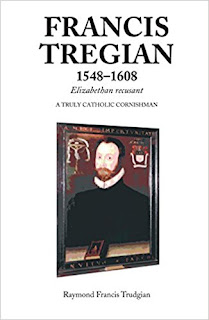 Since he was arrested at Francis Tregian's house, that gentleman was punished:

Tregian was indicted under the Statute of Praemunire prohibiting dissemination of papal bulls. Mayne had a souvenir copy of a proclamation regarding the 1575 Holy Year dispensation, and it was supposed that he intended to give it to Tregian. Tregian was held in the Marshalsea for ten months before being returned to Cornwall for trial. At first the jury would return no verdict, but after threats from the judges a conviction was obtained.

Tregian's death sentence was remitted to imprisonment and his property confiscated. He was incarcerated at Windsor and then in various London prisons for twenty-eight years, eventually winding up at Fleet Prison, where his wife joined him. On the petition of his friends, he was released by King James I. . . .

After his pardon by King James, Tregian retired to Madrid, where he enjoyed a pension from King Philip III of Spain. He died at the Jesuit hospice at St Roque, Lisbon, where he was buried upright under the west pulpit, symbolic of his stand against Queen Elizabeth.

God bless Francis Tregian! St. Cuthbert Mayne, pray for us!
Posted by Stephanie A. Mann at 12:30 AM