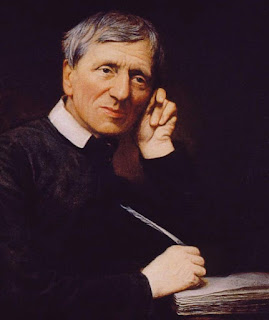 I've been waiting for this article since January of this year, when I wrote:I look forward to learning more about Lingard's reasons for not liking Newman in the promised subsequent article. . . .

I also commented that John Lingard's desire for conversions to the Catholic Church was not completely satisfied by those who converted: he mistrusted Newman and Faber, etc.
Shaun Blanchard's concluding article about Lingard's mistrust and dislike of Newman continues the same theme: rather contradictory but also rather ignorant. For example Blanchard notes that Lingard associated Newman with Faber too closely--he lumped the Oxford converts together without distinction or discrimination:
Lingard followed news of Newman and his conversion closely.[12] However, in addition to never really permitting Newman to shake his association with the Oxford Movement (a strike against him in Lingard’s eyes), the old Cisalpine also seems to have negatively associated Newman with Faber (whom he called “credulous”)[13] and with the burgeoning ultramontanism and Romanticism sweeping English Catholicism. Unfortunately, Lingard never recognized Newman as the profoundly unique thinker he was, nor as one who deftly eschewed the standard binaries and party lines of the age and of the church. Lingard even admitted, in 1845, to not having yet read Newman![14] . . .
The second reason for Lingard’s sense of alienation from those he called the “Newmanites” was more principled. When he bluntly admitted to John Walker in January of 1850 that he “didn’t like Newman” that reasons he cited are telling: “too much fancy or enthusiasm.”[20] While there is an element of taste here—Lingard was a man of the Catholic Enlightenment who naturally recoiled from Romanticism and Pugin’s neo-Gothic revival—there was also an important principle at stake.[21] For Lingard, and many of his generation, the theologically correct and pragmatically most effective way to engage Protestants was through stripping away superstitions, triumphalism, and any unnecessary accretions to the Old Faith. Protestants rightly resented all of these things. What remained could be grasped by Protestants of good will as the pure faith of their English ancestors and, indeed, of the early church.
We have to remember that Lingard died in 1851, just after the Restoration of the Hierarchy and just six (6) years after Newman's conversion--but for one who knows a little about Newman's devotional and even architectural proclivities, these comments are strange and seem unfair. If Lingard hadn't read of any Newman's writings in 1845, would he have read Loss and Gain, the Discourses to Mixed Congregations, or Anglican Difficulties (or followed the reports of the lectures) by 1850?
He seems to have relied merely upon his impressions and prejudices, not upon any real research or sources.
Lingard had very particular goals in mind for any converts, and Blanchard again highlights Lingard's rather contradictory views of the converts coming out of the Oxford Movement:
There is a kind of paradox here, or at least a tension, because on one hand Lingard intimated that the new converts were not Catholic enough—or at least suspiciously attached to “false ideas they imbibed at Oxford”—but on the other hand they were resented for being too Catholic, in the sense of trying to assimilate their Catholicism too much to a foreign standard that was Roman, “Jesuitical,” or Italian. 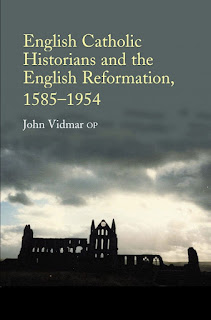 In an odd way, Newman appears to great advantage in this article, because not knowing what Lingard had written about him, he expressed admiration of Lingard's methods and "comportment":
Newman, thankfully, seems to have been totally unaware that Lingard disliked him. At the death of Lingard’s close friend John Walker in 1873 (to whom Lingard confided so much of his disdain for “Newmanites”!). Newman wrote of his “greatest esteem” for Walker. Newman “looked at [Walker] with veneration as one of the few remaining priests who kept up the tradition of Dr. Lingard’s generation of Catholics.”[24] Seven years earlier, Newman had written to John Walker, thanking him for sending information on Lingard’s intra-Catholic controversies in the early 1830’s. In light of his later praise of Lingard, Newman presumably approved of his comportment. In Lingardian fashion, Newman went on in the same letter to caution against the merits of seeking out confrontation with Anglicans.[25] . . .
Blanchard hopes that Lingard might have learned to like Newman if he had lived longer:
Had he lived longer, or had he been fairer to Newman and actually engaged with his thought as an individual rather than a symbol, Lingard would have seen that the sensitive and brilliant Oxford convert was in fact preserving many of the concerns that Lingard himself held dear. We should keep in mind that in the years around Newman’s conversion, Lingard was an old man, suffering on and off from ill health. It is nevertheless unfortunate that Lingard did not engage with Newman’s ecclesiology in particular. He would have discovered a kindred spirit with nuanced and sophisticated views of the structures and offices of the church. Lingard would have also seen how much more he had in common with Newman than with the Mannings, Fabers, and Wards with which he lumped him together. . . .
In his first footnote to the article, Blanchard highlights an excellent source for a review of Father John Lingard's historical career and outlook for his future investigation, which I reviewed in 2010:
An informative chapter on Lingard from John Vidmar should be included in my review of the secondary literature on Lingard: Vidmar, English Catholic Historians and the English Reformation, 1585–1954 (Eastbourne: Sussex Academic Press, 2005), 52–74.
By the way, it's available in paperback now!
Posted by Stephanie A. Mann at 12:00 AM