Whig vs. Tory Interpretations of History 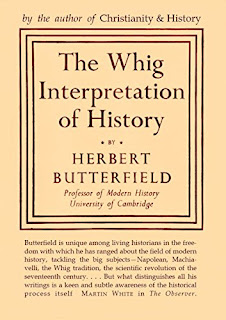 From The Imaginative Conservative, Michael J. Connolly, Professor of History at Purdue University Northwest in Indiana, considers the flaws and limitations of Herbert Butterfield's 1931 study of the Whig view of the interpretation of the past (history), which view emphasizes progress as the preferred and indeed inevitable outcome and the denunciation of anyone in the past who argued against the inevitable progress of civilization. He then explores some themes of the alternative Tory view of the interpretation of the past, which emphasizes order and continuity.

First he argues that Butterfield was still a Whig and had determined that the way to solve the problem of the Whig interpretation of history is to be completely objective:

. . . The question of whether Whiggery and liberalism themselves were to blame goes unexamined. In addition, his preference was for a kind of radical empiricism where the historian studies the past entirely on its own terms. While Butterfield admits that historians cannot perfectly absent themselves from contemporary concerns, he nonetheless pines for an impossible degree of objectivity. Readers of the Whig Interpretation of History can be forgiven for wondering if in Butterfield’s view history has any meaning or moral content whatsoever and if the only possible response to Whig history is a bloodless recitation of facts. . . .

Even Butterfield missed his empirical ideal, when during World War II he back-peddled from his earlier paean to objectivity with ringing defenses of England’s endangered heritage of liberty. History had moral content after all. So, if Butterfield’s antidote to Whiggery falls short, another historical method is needed. It is no use combating Whig history with a kind of historical neutrality of “just the facts,” as it cedes the field to liberals who will rightly claim that objectivity is impossible anyway and continue the triumphant narrative. The Whigs must be met on the historiographical battlefield with opposing interpretive methods. The contrasting force is not the impossible dream of radical objective empiricism, but the Tory interpretation of history with its own values, perceptions, categories, and subsequent narrative.

Then he looks at the Tory interpretation of history as an alternative that has been around for centuries too, and he highlights the Tory emphasis on biography:

The Tory interpretation is not an invention of today, but a genuine school of history that fought against Whig history in the interpretive battles after the “Glorious Revolution” of 1688. Tory historians like the Restoration lawyer Roger North, whose 1706 Examen: Or, An Enquiry Into The Credit And Veracity Of A Pretended Complete History, Showing The Perverse And Wicked Design Of It worked to refute Bishop White Kennett’s Whiggish A Complete History of England, were equally combative as the Whigs and equally full of confident moral judgments based on observations of change over time. The Tory values expressed in their histories contrasted starkly with Whigs and were founded in an alternative vision of how the world works. . . .

As he notes, citing historian Roger Schmidt, the emphasis on biography highlighted the complexity of the past, because as we all know from personal experience, an individual human being is complex and complicated in motive, action, effort, and success. Emphasis on biography also helps us empathize with the person in the past, facing whatever crisis he or she faced: perhaps it help us neither demonize or canonize that person and his or her cause. (Thinking of course of "canonization" outside of the Catholic Church's determination that a saint is worthy of veneration and is in Heaven to intercede for us with God the Father!)
Please read the rest there. I think these are important issues to consider when so many today think that we know precisely who today is "on the right side of history" and thus censure, censor, or cancel those aren't and think we know absolutely who in the past was "on the wrong side of history" and thus should be censured, censored, or cancelled. Case in point: Saint Junipero Serra. (We should remember that the Catholic Church never teaches that any saint in Heaven is indefectible, just holy, which should be a great consolation to all of us!)
In a comment, Connolly provides the sources he cited:
Michael Gordin, “The Tory Interpretation of History,” Historical Studies in the Natural Sciences, Vol. 44, 4 (2014) 413-423.Mark Knights, “The Tory Interpretation of History in the Rage of Parties,” Huntington Library Quarterly, Vol. 68, Nos 1&2 (2005) 353-372.Wilfred McClay, “Whig History at Eighty,” First Things, March 2011.Roger Schmidt, “Roger North’s Examen: A Crisis in Historiography,” Eighteenth Century Studies, Vol. 26, 1 (1992) 57-75.
Posted by Stephanie A. Mann at 12:00 AM