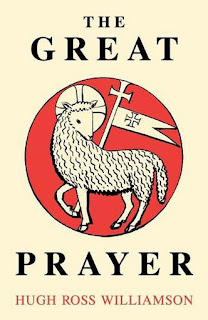 I have heard of Hugh Ross Williamson (1901-1978) before: he was an early revisionist historian of the Whig tradition of the English Reformation and its aftermath: The Gunpowder Plot (1951); The Beginning of the English Reformation (1957); The Conspirators and the Crown (1959), etc. He was raised in a Nonconformist (English Protestants not accepting Church of England doctrine and worship) family, became an Anglican minister in 1943 and then became a Catholic in 1955.
At that time there was no Pastoral Provision (as Pope Saint John Paul II established in 1982) or Anglican Ordinariate (as Pope Benedict XVI established in 2009), so as he was married, he became a layman in the Catholic Church and continued his career as a prolific author. Joseph Pearce highlights his career in Literary Converts: Spiritual Inspiration in an Age of Unbelief (Ignatius Press).
One of the best anecdotes Pearce relates is Williamson's opportunity to write a play for the 1953 Canterbury Festival (the same event for which T.S. Eliot wrote Murder in the Cathedral and Dorothy L. Sayers The Zeal of Thy House). Like Eliot, whom Williamson admired, he wrote a play about a former Archbishop of Canterbury, entombed in the Cathedral like many Catholic archbishops before him: Reginald Cardinal Pole (!). The current Archbishop of Canterbury, Geoffrey Fisher, did not attend Williamson's play, His Eminence of England, and Robert Speaight, the Catholic (convert) actor who portrayed both St. Thomas of Canterbury and Reginald Cardinal Pole in their respective plays, regretted the low turnout for the performances.
When he became a Catholic, Williamson lost all his sources of income, including his role on the BBC Brains Trust program (the BBC TV version). His brain--being now Catholic--could not be trusted. So he wrote, acted (as Ian Rossiter), etc., to support his family.

I'm going to comment on these books in the reverse order of my reading: The Great Prayer (Gracewing) and The Great Betrayal (Arouca Press). That's the order in which he wrote them.

The first point to be made about The Great Prayer is that he wrote it was he was still an Anglican minister (dated Maundy Thursday, 1954). When Gracewing (a Catholic publisher in the UK) republished the book, it did not seek a Nihil Obstat or Imprimatur from a Catholic diocese but did ask a Catholic bishop, Alan S. Hopes, to recommend the book.

N.B.: Hopes had evidently never been married, thus did not need a Pastoral Provision or Personal Ordinariate.

In his introduction, Hopes notes that "while this is not the most up-to-date scholarly work on this Eucharistic prayer, it does nevertheless hold its value. Its freshness of style will make it a pleasant as well as an informative read for today." (p. vi)

The point is: this is a historical document as much as it is a liturgical and theological study of the Roman Canon, what is now the First Eucharistic Prayer in the Roman Missal of 1970, but which remains the only Eucharistic Prayer in the Roman Missal of 1962. When Hugh Ross Williamson wrote it, he was convinced of certain ecclesiastical and doctrinal facts within the Church of England that proved not to be true: therefore he became a Catholic.

He hoped that the Roman Canon, since it existed for more than a thousand years before the Church of England was established, could be a point of unity between Catholics and Protestants. He thought that it did not require belief in the doctrine of Transubstantiation to believe in The Real Presence of Jesus Christ, Body, Blood, Soul, and Divinity, since this Great Prayer was in use before the Council of Trent.

Like Newman, Williamson was appealing to antiquity (and more recent history before the English Reformation) for the basis of change or reform in the Church of England:

In praying the Canon we unite ourselves with all fellow-Christians 'throughout the ages, world without end'. In knowing the Canon, we become grounded in the teaching of the primitive Church which Protestants no less than Catholics accept [sic?] and so we may find that the Lord's Table, despite all the controversies which have disgraced His followers, is indeed the centre of unity." (p. 14) . . .

The first Archbishop of Canterbury, Saint Augustine, sent by Pope Saint Gregory the Great, had offered the unbloody Sacrifice of the Mass to the Father through the Son in the Holy Spirit through this Great Prayer--why couldn't he, Father Hugh Ross Williamson, do the same?

But his Archbishop of Canterbury, Geoffrey Fisher, disagreed with him on this point as he did on the play celebrating Cardinal Archbishop Pole. I was surprised that in Literary Converts Pearce said that the issue of the Church of South India being admitted to the Anglican Communion was the final blow for Williamson, not the use of the Roman Canon/the Great Prayer in Anglo-Catholic services.

There is another interesting parallel between Newman and Williamson here: one of the last blows for Newman, moving him from his Anglican deathbed to the "one, true fold of Christ" was the Jerusalem bishopric to be shared by Church of England and Lutheran prelates.

Williamson descries the "Irrational prejudices [that] still cloud the reason" among the English against the spiritual authority of the Pope (who is mentioned and prayed for in the first prayer of the Great Prayer, the Te Igitur). Although Article XXXVII (37) of the Thirty-Nine Articles rejects the authority of the Pope within England, Williamson argues that it clear that the current Pope (Pius XII) has spiritual, moral, and doctrinal authority over Catholics throughout the world. He wishes that the continuing cries of "No Popery" would cease.

Just to continue the thread of Archbishop Geoffrey Fisher's impact, we should note that he met with Pope John XXXII at the Vatican in 1960--the first contact between the head of the Church of England and the Vicar of Christ for centuries.

So Williamson faced two of the main issues dividing Protestants (and some Anglo-Catholics) and Catholics: the Real Presence and the authority of the Pope. He also addresses Catholic (catholic?) beliefs about the Blessed Virgin Mary, prayer for the dead, the Communion of Saints, and other controversial topics between Catholics and Protestants from an Anglo-Catholic viewpoint.

Throughout his explication of the Great Prayer, Williamson emphasizes the sacrificial aspect of the Mass, of the offering of the bread and wine, of the re-presentation of the sacrifice of Jesus on the Cross, and on the atonement we participate in through this prayer. He notes again that many outside the Church misunderstand what happens at Mass: we do not crucify Jesus again; this an unbloody sacrifice. We can only offer what God has given us; not just the bread and wine on the Altar but ourselves, our intentions, our desire to be one with God. As Williamson also emphasizes, that's the meaning of atonement and he wishes we pronounced it at-one-ment--we want to be united with God and the only way we can be is through Him. We cannot do it ourselves. (Williamson notes that Pelagianism is "that old British heresy which might even be called modern British orthodoxy" (p. 145)--the English priest Pelagius had taught that Original Sin had no effect on human nature; we all had the ability to save ourselves through our Free Will choice of doing good and living according to the Commandments and we really didn't need God's Grace to do so.)

As he notes in the section on "Unde et Memores" after the Consecration:

A major frustration throughout the text is that Williamson cites and quotes many authors and works, but does not provide footnotes or definite sources! He refers to Chesterton, Newman, Dom Gregory Dix, the Cure d'Ars, Pope Innocent III, Pope Pius X, C.S. Lewis, Archbishop of Canterbury Benson and his son the Catholic convert Father Benson (I presume), Dean Farrar, Gerard Manley Hopkins, and many, many others. Sometimes he mentions a title, like The Breaking of the Bread (Father John Coventry), Liturgy and Life (Dom Theodore Wesseling), The Christian Sacrifice (Dom Eugene Masure), etc., but he still does not give page numbers or other information. Gracewing obviously published the book without tracking down those citations, because that would be a time-consuming project. 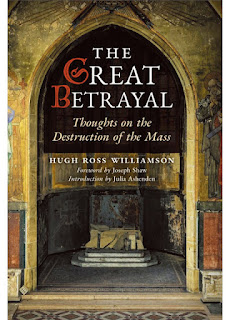 Based upon his deep understanding of the Sacrifice of the Mass and the role of the priesthood, I presume that it would have been a great sorrow to him that when he became Catholic that he could not celebrate the Mass as a Catholic in the fullness that he had wanted to as an Anglican. Williamson could still participate in the offering of the Mass and receive the Body, Blood, Soul, and Divinity of Jesus in Holy Communion, but he could not consecrate the bread and the wine.

But the further sorrow for him--which I'll continue in another post soon--came for him with the changes in the order of the Mass after the Second Vatican Council in the Roman Missal of 1970. He addressed those in the next book I'll review, The Great Betrayal--and among the issues he discusses there is the creation of optional Eucharistic Prayers which he contends do not represent the Sacrifice the Mass as fully as the Great Prayer/The Roman Canon (that's really litotes on my part!).

Arouca Press has brought two of Williamson's essays together in this edition:"The Modern Mass: a Reversion to the Reforms of Cranmer" from 1969 and "The Great Betrayal: Some Thoughts on the Invalidity of the New Mass" from 1971. Joseph Shaw, the current Chairman of the Latin Mass Society in the UK and Williamson's daughter, Julia Ashenden, who was also one of Joseph Pearce's sources in Literary Converts for information about her father, contributed the Foreword and Introduction, respectively.

Obviously, a more controversial subject. Reading that volume and Pearce's reporting of Williamson's last years reminded me of Evelyn Waugh's bitter trial with the changes made to the celebration of Holy Week and the Holy Mass before the Roman Missal of 1970.