Preview: Newman on the Mystery of the Ascension 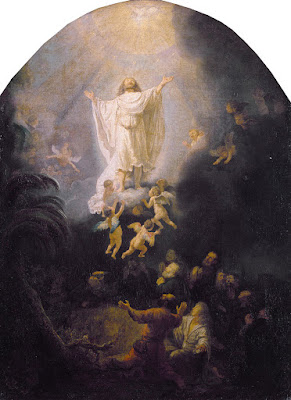 Anna Mitchell and I will talk about "Mysteries in Religion", an Ascension Thursday sermon by St. John Henry Newman on Monday, May 18 on the Son Rise Morning Show about 7:50 am. Eastern/6:50 a.m. Central.

This sermon is from volume 2 of his Parochial and Plain Sermons. He begins the sermon with the verse "It is Christ that died, yea rather, that is risen again, Who is even at the right hand of God, Who also maketh intercession for us." Rom. viii. 34.

Unlike the sermon we talked about on Monday this week, "The Spiritual Presence of Christ in the Church" Newman does not mention the mixture of joy and sorrow the Apostles or even we might feel ("Thus Christ's going to the Father is at once a source of sorrow, because it involves His absence; and of joy, because it involves His presence.")--this sermon is all about the wonder, awe, and thankfulness we should feel:

THE Ascension of our Lord and Saviour is an event ever to be commemorated with joy and thanksgiving, for St. Paul tells us in the text that He ascended to the right hand of God, and there makes intercession for us. Hence it is our comfort to know, that "if any man sin, we have an Advocate with the Father, Jesus Christ the righteous, and He is the propitiation for our sins." [1 John ii. 1, 2.] . . .

Wonder and awe must always mingle with the thankfulness which the revealed dispensation of mercy raises in our minds. And this, indeed, is an additional cause of thankfulness, that Almighty God has disclosed to us enough of His high Providence to raise such sacred and reverent feelings. Had He merely told us that He had pardoned us, we should have had overabundant cause for blessing and praising Him; but in showing us somewhat of the means, in vouchsafing to tell what cannot wholly be told, in condescending to abase heavenly things to the weak and stammering tongues of earth, He has enlarged our gratitude, yet sobered it with fear. We are allowed with the Angels to obtain a glimpse of the mysteries of Heaven, "to rejoice with trembling." Therefore, so far from considering the Truths of the Gospel as a burden, because they are beyond our understanding, we shall rather welcome them and exult in them, nay, and feel an antecedent stirring of heart towards them, for the very reason that they are above us. Under these feelings I will attempt to suggest to you on the present Festival some of the incentives to wonder and awe, humility, implicit faith, and adoration, supplied by the Ascension of Christ.

The first great mystery we should reflect upon is that Christ's ascension to the Father "is a sure token that heaven is a certain fixed place, and not a mere state." Heaven is real:

That bodily presence of the Saviour which the Apostles handled is not here; it is elsewhere,—it is in heaven. This contradicts the notions of cultivated and speculative minds, and humbles the reason. Philosophy considers it more rational to suppose that Almighty God, as being a Spirit, is in every place; and in no one place more than another. It would teach, if it dare, that heaven is a mere state of blessedness; but, to be consistent, it ought to go on to deny, with the ancient heretics, referred to by St. John, that "Jesus Christ is come in the flesh," and maintain that His presence on earth was a mere vision; for, certain it is, He who appeared on earth went up from the earth, and a cloud received Him out of His Apostles' sight. And here again an additional difficulty occurs, on minutely considering the subject. Whither did He go? beyond the sun? beyond the fixed stars? Did He traverse the immeasurable space which extends beyond them all? Again, what is meant by ascending? Philosophers will say there is no difference between down and up, as regards the sky; yet, whatever difficulties the word may occasion, we can hardly take upon us to decide that it is a mere popular expression, consistently with the reverence due to the Sacred Record.

Newman admits that there seems to be a contradiction between the Biblical view of the world and the philosophical or scientific view of the solar system and the universe, but he admonishes that the latter is too limited to explain the reality of Heaven, the mystery of Christ's Ascension--or of His return:

I will but remind you on this part of the subject, that our Lord is to come from heaven "in like manner" as He went; that He is to come "in clouds," that "every eye shall see Him," and "all tribes of the earth wail because of Him." Attempt to solve this prediction, according to the received theories of science, and you will discover their shallowness. They are unequal to the depth of the problem.

Newman then cites the description of Jesus as the Great High Priest in The Letter to the Hebrews:

Christ, we are told, has gone up on high "to present Himself before the face of God for us." He has "entered by His own blood once for all into the Holy Place, having effected eternal redemption." "He ever liveth to make intercession for those who come unto God by Him; He hath a priesthood which will not pass from Him." "We have such an High Priest, who is set on the right hand of the throne of the Majesty in the heavens; a Minister of the Sanctuary, and of the true Tabernacle, which the Lord pitched, and not man." [Heb. ix. 12, 24, 25; vii. 24, 25; viii. 1, 2.]

We are not given to see into the secret shrine in which God dwells. Before Him stand the Seraphim, veiling their faces. Christ is within the veil. We must not search curiously what is His present office, what is meant by His pleading His sacrifice, and by His perpetual intercession for us. And, since we do not know, we will studiously keep to the figure given us in Scripture: we will not attempt to interpret it, or change the wording of it, being wise above what is written. We will not neglect it, because we do not understand it. We will hold it as a Mystery, or (what was anciently called) a Truth Sacramental; that is, a high invisible grace lodged in an outward form, a precious possession to be piously and thankfully guarded for the sake of the heavenly reality contained in it. Thus much we see in it, the pledge of a doctrine which reason cannot understand, viz. of the influence of the prayer of faith upon the Divine counsels. The Intercessor directs or stays the hand of the Unchangeable and Sovereign Governor of the World; being at once the meritorious cause and the earnest of the intercessory power of His brethren. "Christ rose again for our justification," "The effectual fervent prayer of a righteous man availeth much," are both infinite mercies, and deep mysteries.

Finally, Newman quotes the words of Jesus that "It is expedient for you that I go away . . ." (John 16:7) and makes a remarkable connection between Jesus' Ascension and the death of our loved ones--that their absence from us on earth, like His, is part of God's divine plan:

This is a thought which is particularly soothing as regards the loss of friends; or of especially gifted men, who seem in their day the earthly support of the Church. For what we know, their removal hence is as necessary for the furtherance of the very objects we have at heart, as was the departure of our Saviour. . . .

. . . yet, it may be, that Saints departed intercede, unknown to us, for the victory of the Truth upon earth; and their prayers above may be as really indispensable conditions of that victory, as the labours of those who remain among us. They are taken away for some purpose surely: their gifts are not lost to us; their soaring minds, the fire of their contemplations, the sanctity of their desires, the vigour of their faith, the sweetness and gentleness of their affections, were not given without an object.

I'll post some excerpts from his conclusion on Monday.