May 19 in the Lives of Four Queens

On May 19, 1536, former Queen Anne Boleyn was beheaded for adultery, treason, incest.

On May 19, 1568, Queen Elizabeth I of England ordered the house arrest of the former Queen of Scotland, her cousin Mary Stuart Valois Stuart Bothwell.

What a coincidence that three such momentous events occurred on the same date in the month of May! 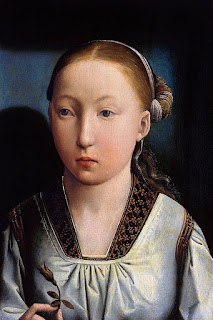 Arthur and Catherine would not meet in England until November 4, 1501 and were married in person on November 14 in Old St. Paul's Cathedral. Then the Prince and Princess of Wales set off for Ludlow Castle to preside over the Council of Wales and the Marches, residing at the Castle Lodge. They both became ill and Arthur died on April 2, 1502, while Catherine recovered.

Then Henry VII decided to keep her (and her dowry) in England, so from 1502 to 1509 protracted marriage negotiations took place between Henry and Ferdinand of Aragon, her father (her mother Isabella of Castile died in 1504). Henry VII's wife and queen, the former Elizabeth, Princess of York died in 1503 and he thought of marrying Catherine himself. It was finally decided that she would marry Henry, the Duke of York, and Henry VII applied for a dispensation from the Pope, Julius II, with Catherine testifying that she and Arthur had never consummated their marriage, so there were no issues of affinity. Nevertheless, she was held almost as a prisoner in Durham House, London, the impoverished guest of the Bishop of Durham. When Henry VII died, Henry VIII married her on June 11, 1509 and she was crowned and anointed with him later that month on the 24th. She remained Queen until May 23, 1533 when Thomas Cranmer, the Archbishop of Canterbury, declared her marriage to Henry VIII null and void. She had been in exile from the Court since 1531 and would die in her final place of residence, Kimbolton Castle, on January 7, 1536 (after being moved six times in four years!) Henry VIII titled her the Dowager Princess of Wales; she accepted no title but Queen and true wife of the king. Although her last letter to Henry VIII is contested, authorities agree that this text expresses Catherine's attitude toward her husband and their daughter Mary and her rightful status as his wife and queen:

My most dear lord, king and husband,

The hour of my death now drawing on, the tender love I owe you forceth me, my case being such, to commend myself to you, and to put you in remembrance with a few words of the health and safeguard of your soul which you ought to prefer before all worldly matters, and before the care and pampering of your body, for the which you have cast me into many calamities and yourself into many troubles. For my part, I pardon you everything, and I wish to devoutly pray God that He will pardon you also. For the rest, I commend unto you our daughter Mary, beseeching you to be a good father unto her, as I have heretofore desired. I entreat you also, on behalf of my maids, to give them marriage portions, which is not much, they being but three. For all my other servants I solicit the wages due them, and a year more, lest they be unprovided for. Lastly, I make this vow, that mine eyes desire you above all things. 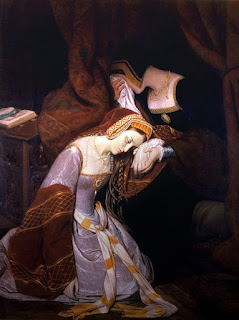 Another former wife and queen of Henry VIII at the time of her death (as Thomas Cranmer and Henry VIII agreed), Anne Boleyn of course was the woman who had replaced Catherine of Aragon. She and Henry had been married on November 14, 1532 (secretly) and that marriage declared valid by Cranmer several days after he'd declared Henry's marriage to Catherine null and void, on May 28, 1533. She was crowned on June 1, 1533--and was pregnant at the time with the hoped-for male heir, it was believed--in a sumptuous ceremony and celebration. She delivered a girl, however, on September 7, 1533 (named Elizabeth) and after two miscarriages, had failed to provide Henry VIII with the son for whom he had turned the world upside down (separating the Catholic Christians of England from the universal Catholic Church and the papacy, executing good men and true, making his daughter Mary a bastard, and changing the worship and devotions of Catholics in England, among other actions).

Catherine of Aragon having died on January 7, 1536, Anne and Henry had felt more secure, although there's a lot of debate about their reactions, public and private, to the news. Anne was arrested and taken to the Tower of London on May 2, 1536; Cranmer declared her marriage to Henry VIII null and void on May 14; she was tried and found guilty of adultery, treason, and incest (with her brother George) on May 15 and beheaded with a sword within the Tower precincts on May 19. Her last words:

Good Christian people, I am come hither to die, for according to the law, and by the law I am judged to die, and therefore I will speak nothing against it. I am come hither to accuse no man, nor to speak anything of that, whereof I am accused and condemned to die, but I pray God save the king and send him long to reign over you, for a gentler nor a more merciful prince was there never: and to me he was ever a good, a gentle and sovereign lord. And if any person will meddle of my cause, I require them to judge the best. And thus I take my leave of the world and of you all, and I heartily desire you all to pray for me. O Lord have mercy on me, to God I commend my soul.

With her head on the block, she repeated these words several times: "To Jesus Christ I commend my soul; Lord Jesu receive my soul." One stroke of the sword and she was beheaded and then buried in St. Peter ad Vincula (where two of the good men and true mentioned above, Sts. John Fisher and Thomas More had been buried a year before). 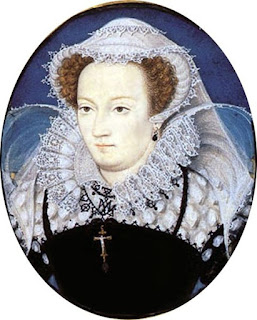 Mary, Queen of Scots, who had claimed her right to the throne of England as the queen consort of France before returning home to Scotland, had been forced to abdicate in favor of her infant son (James VI) on July 24, 1567 while being held in Loch Leven Castle. She escaped from that castle on May 2, 1568 and after defeat at the Battle of Langside on May 13, fled to England on May 16. Mary was soon under house arrest on May 19, held first at Carlisle Castle and then at Bolton Castle. Inquiry into her role in the death of Henry Stuart, Lord Darnley in 1567, led to no conviction or finding of guilt, but she was imprisoned for the rest of her life, held in some comfort and at tremendous, unremunerated cost by her hosts, the Shrewsburys at their various estates, and then moved to Fotheringay Castle under close confinement on September 26, 1586 for trial (complicity with the Babington plot) and subsequent execution on February 7, 1587. Her last words, like Anne Boleyn's, were also repeated several times:  "In manus tuas, Domine, commendo spiritum meum" (Into your hands, O Lord, I commend my spirit" Luke 23:46) and unlike Anne Boleyn, she was not decollated with one stroke of a fine French sword--the first blow hit the back of her head.