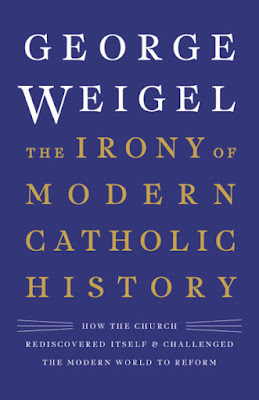 A powerful new interpretation of Catholicism’s dramatic encounter with modernity, by one of America’s leading intellectuals

Throughout much of the nineteenth century, both secular and Catholic leaders assumed that the Church and the modern world were locked in a battle to the death. The triumph of modernity would not only finish the Church as a consequential player in world history; it would also lead to the death of religious conviction. But today, the Catholic Church is far more vital and consequential than it was 150 years ago. Ironically, in confronting modernity, the Catholic Church rediscovered its evangelical essence. In the process, Catholicism developed intellectual tools capable of rescuing the imperiled modern project.

A richly rendered, deeply learned, and powerfully argued account of two centuries of profound change in the church and the world, The Irony of Modern Catholic History reveals how Catholicism offers twenty-first century essential truths for our survival and flourishing.

This is a fascinating but ultimately frustrating overview of the history of the Catholic Church from 1789 to 2018. It's fascinating because Weigel interprets Church History from the French Revolution to the McCarrick Scandal to help his readers understand how the Catholic Church has been reacting to the loss of Christian faith in modern society since the late eighteenth century, largely through the projects and efforts of our Popes. From Popes Pius VI and VII's wranglings with the French Revolution and Napoleon, Weigel takes us through the pontificates of Gregory XVI, Pius IX, Pius X, Pius XI, and Pius XII; then to Pope John XXIII and the Second Vatican Council, Pope Paul VI and the confusion after the Council, Pope John Paul II and Pope Benedict XVI and the project to revive the implementation of the Second Vatican Council in transition to the New Evangelization and the pontificate of  Pope Francis. Its frustrating because of how it seems the Church may be stalled in our efforts to help the modern world--our world--love Jesus and love each other.

Weigel organizes this history as a drama with five Acts and four Entr'Actes. The Acts drive the narrative history forward on stage while the Entr'Actes consider important events and personalities off stage. He provides both narrative drive and cogent analysis with attention to biographical detail.

Act One describes the pontificates of Gregory XVI and Pius IX, including a discussion of the First Vatican Council and Papal Infallibility, as these popes were opposed to many of the hallmarks of modernity and its rejection of Catholic teaching authority, while the first Entr'Acte highlights the contributions of Mohler, Rosmini, Scheeben, Ketteler, and Newman to different responses to the revolutions of the nineteenth century--and the distinctive position of the Catholic Church in the United States of America.

Act Two places Pope Leo XIII at center stage with his efforts to "gingerly" reach out to the modern world, reviving Catholic philosophy and theology through his emphasis on St. Thomas Aquinas and biblical interpretation and proposing some Catholic wisdom for the industrial age and the treatment of workers with dignity (Rerum Novarum); then Pius X comes on stage with his efforts at sacramental renewal and battles with Catholic modernists; World War I and Benedict XV follow, reviving Pope Leo XIII's projects; then Pope Pius XI; and finally Pope Pius XII. Weigel shows great appreciation of three of the latter's encyclicals, Mystici Corporus Christi, Divino Afflante Spiritu, and Mediator Dei, but deprecates Humani Generis.

Act Three brings us to Pope John XXIII and what he hoped to achieve with the Second Vatican Council to "embrace modernity", examining Gaudet Mater Ecclesia, and then various documents of the Council, including Lumen Gentium, Dei Verbum, and Dignitatis Humanae. Weigel offers a substantial critique of Gaudium et Spes, pointing out particularly how dated some of its optimism of how well modern democracy and the Catholic Church would be able to get along seems now. So the Entr'Acte, not surprisingly, examines the aftermath of the Council: Pope Paul VI's efforts to implement it, highlighting Evangelii Nuntiandi; Karol Wojtyla's vade mecum Sources of Renewal and his curial retreat Signs of Contradiction; and the theological rivalry between Communio and Concilium. 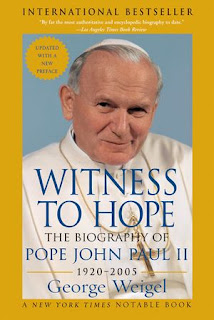 With Act Four Weigel brings two of his favorite dramatis personae to the stage: the protagonist Karol Wojtyla (Pope John Paul II), and in the supporting role, Joseph Ratzinger (Pope Benedict XVI). If you are familiar with Weigel's great biography of Pope John Paul II you'll find much that you've read about before with a overview of his papacy and his encyclicals. Weigel also offers an analysis of Pope Benedict XVI's four "September Lectures": Regensberg (9/12/2006); Bernardins (9/12/2008); Westminster (9/17/2010); Bundestag (9/22/2011)--all Weigel's commentary is focused on how these two "distinctively modern men" offered modernism some critiques of unresolved issues of reason, freedom, conscience, morality, economy, and society.

The Entr'Acte reviews the problem of implementing the reforms of the Second Vatican Council since it was "the Council without Keys" and the solution to this problem: the Extraordinary Synod of 1985. Weigel sets the stage for the last Act with the Great Millennium of 2000 and New Evangelization.

So in Act Five, after explaining John Paul II's vision in Novo Millennio Ineunte, Weigel inserts a flashback to Redemptoris Missio, his 1990 encyclical on the Church's permanent missionary mandate. Weigel also examines John Paul's efforts to influence the EU Constitution, which was poised to skip all of its history from 180 to 1596 by avoiding any mention of Christianity. His 2003 General Audiences and the post-synodal apostolic exhortation Ecclesia in Europa attempted to remind Europeans of the work of the Church to proclaim the Gospel of Hope in Jesus Christ.

Then Weigel comes to the unsatisfactory denouement: "The Franciscan Stall". He has to end his review of Pope Francis' pontificate with the McCarrick revelations of 2018, but he starts with Evangelli Gaudium, the 2013 apostolic exhortation setting out the Franciscan program of evangelization and the continued spread of the Joy of the Gospel. Then Weigel describes the confusion of the 2014/2015 Synods on the Family and the 2018 Synod on Young People, which both resulted in contradictions of the teaching of the Second Vatican Council (Dei Verbum) on the deposit of faith; Jesus Christ on marriage, and St. Paul on the worthy reception of the Body and Blood of Jesus in Holy Communion with implications of historicism (Church moral and sacramental teaching can change with and adapt to the mores and trends of the world) and a new Gallicanism (what's true in Poland about Catholic teaching might not be true in Germany). Weigel asks how this helps fulfill the efforts of the New Evangelization to spread the Joy of the Gospel to everyone, those who believe, those who've fallen away, and those who've never heard of Jesus.

Then the McCarrick Crisis, with the Vatican displaying the same old modes of "institutional-maintenance and status-quo thinking" with slow responses (not to mention Pope Francis' intransigence regarding the Chilean bishop) demonstrated that Pope Francis, blaming a culture of clericalism, still didn't want to take action in certain cases or be transparent: we've been promised a report for almost two years on how a serial abuser of boys and seminarians became a Cardinal and continued to have influence even after he was supposed to retire from official duties and it hasn't been issued yet.

So we have to wait for the continuation of Act Five or for Act Six.

In the meantime, Weigel summarizes his argument that the Church has rediscovered itself through contending with the issues of modernism and can offer the modern world some guidelines for reform of its own issues: doubt, the naked will to power, emptiness. Jesus Christ is the answer to every human question, he concludes, and the Catholic Church has, from the Apostles, through the Popes, Bishops, clerics and laity, been offering that answer throughout the ages. We may be stalled as Weigel believes, but we still have a message to share and solutions to propose: "liberating truths about salvation and the ultimate destiny of human beings" through the Person of Jesus Christ.

Except for some glimpses in the Entr'Actes, Weigel's spotlight is on the top of the Church's hierarchy: the Popes, but that makes sense since he is describing the Church's official responses to modernity. He provides a good list of sources. Fascinating but frustrating.
Posted by Stephanie A. Mann at 12:00 AM