A Cromwell Without Purpose or Opponent 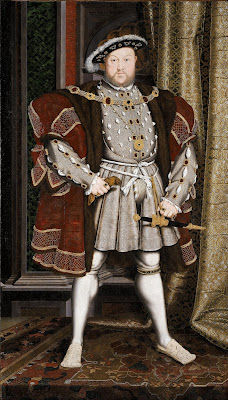 I admit that I have not read all Hilary Mantel's trilogy of novels on Thomas Cromwell--or at least not read all three of them through*. I've engaged with her characterization of Saint Thomas More in the first book, Wolf Hall, which I did read (and watched the miniseries based upon it). I skimmed through Bring Up the Bodies and have not read The Mirror and the Light. I am not a great fan of the stream of consciousness narrative style.

Nevertheless, I found this review by Nicholas M. Gallagher of the third book in the trilogy, the publication of which was rather delayed, in National Review to be well-written and even convincing. Gallagher points out the excellent qualities of the book, Mantel's mastery of stream-of-consciousness narrative, and her control of the third person narration's limited omniscience. But Gallagher points out the big problem in this book, much of which takes place while Thomas Cromwell was Vicar General and Viceregent of the King in Spirituals (implementing the Henrician reformation): the narrator's omniscience and the stream of consciousness never show us what Thomas Cromwell believed about God, salvation, Jesus, and the Church.

As Gallagher notes, Cromwell is never depicted as practicing his faith:

The tell is that, with one possible exception, we never hear Cromwell pray. Like Moses in the desert, the early Protestants — of whom Cromwell was one — spoke to God face to face. Along with reading the Bible in their native tongues, this defined their internal experience: They had stripped away priests, saints, and sacraments, and gloried in this direct communion. With Mantel’s Cromwell, though, we hear that he wakes up early and “says his prayers” — but we never hear the prayer. We learn that he attended services, but never see them through his eyes. We hear him address a dead cardinal and live servants in his head, but never God. Similarly, Cromwell describes his political actions as advancing “the cause of the gospel,” and risks his life and position to see the scriptures translated into English — but he never, to our eyes, reads them.

Gallagher believes this is important because without knowing what Cromwell believes and what he stands for or against--because there is no real conflict in the novel--we don't understand his motivation or his purpose. We knew why Mantel's Cromwell did what he did in the first novels; he had worthy opponents: Thomas More in Wolf Hall; Anne Boleyn in Bring Up the Bodies. Mantel's Cromwell has no worthy opponents in this novel. Yes, he contends with the nobles who resent his power and influence with the king, he deals with Catholics who rebel against the Dissolution of the Monasteries, etc, but Gallagher writes that for pages nothing much happens and that when trouble finally starts for Cromwell, on about page 600 of 754, he doesn't adapt to protect himself and we don't really know why:

Mantel’s Cromwell is smarter, more pragmatic, and more cunning than all the fanatics, fop-headed aristocrats, and would-be Machiavels that he runs up against. It is not credible that he would not see the crisis that leads to his downfall coming and adapt to it pragmatically: trimming his sails to accommodate Henry VIII’s desire not to get too far from traditional Catholic practices, forging temporary alliances with the conservative nobles that come for his head, taking them in and then casting them down as he had so many other, more dangerous foes before. Unless. Unless he had a damn good reason not to, a point of principle on which he would not yield even at the cost of his life.

In Gallagher's opinion, Mantel does not provide us with that principle; therefore, the Cromwell of Mantel's third novel is strangely passive. Please read the rest of the review here.

Perhaps the problem is that if Thomas Cromwell had an opponent in the last years of his life, it was Henry VIII. Having done everything Henry VIII wanted--getting rid of Catherine of Aragon, destroying the power of the Catholic Church, the Pope, and the English hierarchy, gathering up the wealth of the Catholic Church including the monasteries, and then getting rid of Anne Boleyn and finally finding a wife who would bear him a son who seemed likely to survive to inherit the throne--what else could Cromwell do but keep doing what Henry VIII wanted? That was the only way to stay in power and in favor. One question about Cromwell's character in the first novels was did he really want to do everything Henry VIII wanted him to do or did he just do it because it was the way to achieve what he wanted?

Remember also that one of the motivations for Cromwell's actions in the earlier novels was revenge against those--including Anne Boleyn--who had brought down Cardinal Wolsey, Cromwell's first mentor.

Who else brought down Wolsey?

He would have been a worthy historical fiction opponent of Cromwell. That opposition would have created a different stream of consciousness: how do I, Thomas Cromwell, get revenge on Henry VIII? How do I seem to serve my king while serving my own purposes for power, prestige, wealth, and great achievement?

Cromwell can't overthrow the king since Henry VIII's favor is the source of the power he has, but how can he manipulate the king to get what he wants? If Cromwell wanted to remake the world--the medieval world of England, the status quo world of Continental Europe--how could he do it when his master won't always cooperate? Mantel would have had a great story there.

Perhaps I should read The Mirror and the Light.

*Referring to an anecdote from the Life of Johnson: Mr. Samuel Elphinston commented on a new book to Samuel Johnson, who replied that he had "looked into it". Elphinston asked "have you not read it through?" Boswell reports that Johnson, "offended at being thus pressed, and so obliged to own his cursory mode of reading, answered tartly, 'No, Sir; do you read books through?'" We are not told Mr. Elphinston's reply.
Posted by Stephanie A. Mann at 12:00 AM