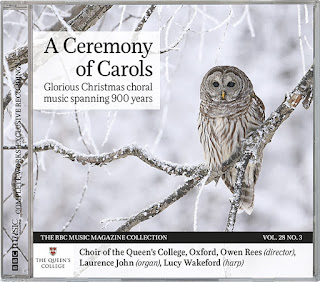 I posted on the BBC's Classical Music Magazine's selection of a carol by Owain Park earlier this month. Yesterday I began listening to the CD included with the magazine, A Ceremony of Carols from the Choir of the Queen's College in Oxford.

You may see the selection of the Carols chosen here. You may notice that six of the works are by Michael Praetorius, who, according to this website was: 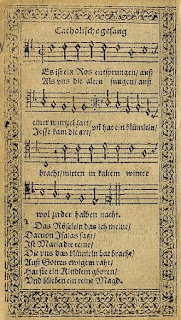 The son of a pastor who had been a pupil of Luther, he became organist at the Marienkirche, Frankfurt an der Oder, in 1585. From 1595 he served the Bishop of Halberstadt as organist, demonstrating a new instrument there to many famous organists the following year. When his patron became Duke of Braunschweig-Lüneburg, he went with him to Wolfenbüttel and became his Kapellmeister in 1603. This post necessitated much travelling in Germany, which enabled him to earn widespread renown as a conductor of musical performances, an organ consultant, and a knowledgeable expert on practical music and on musical instruments.

Praetorius was a Lutheran church composer of amazing industry. Dominating his output is the 9-volume Musae Sioniae containing 1,244 chorale settings, but he published many others too, altogether including pieces on every conceivable scale from little bicima (sic) to massive Polychoral variations with instrumental support. He also wrote much other liturgical music and a set of 312 dances (Terpsichore). His 3-volume treatise Syntagma Musicum (1619) is an invaluable compendium of information on German music, musical instruments and performance, based on what he heard and saw in his travels.

Praetorius is most famous for his arrangement/harmonization of "Es ist ein Ros entsprungen", translated as "Low, how a Rose E'er Blooming" (see illustration of original tune).

I have an extensive collection of Christmas CD's from the BBC's Classical Music Magazine because my late husband bought me a subscription to the magazine for my birthday or Christmas for many years. This is the last issue from the last subscription he gave me last year.

I've decided not to renew the subscription.
Posted by Stephanie A. Mann at 12:00 AM