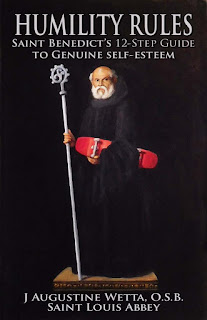 This next set of books offers some humbling challenges, starting with learning how to be more humble from St. Benedict of Nursia, via a Benedictine monk of the St. Louis Abbey:

Saint Benedict's fifth-century guide to humility offers the antidote to the epidemic of stress and depression overwhelming modern young adults. But the language of The Rule by Saint Benedict is medieval, and its most passionate advocates are cloistered monks and nuns. How then does this ancient wisdom translate into advice for ordinary people?

With candor, humor, and a unique approach to classical art, Father Augustine, a high school teacher and coach, breaks down Saint Benedict's method into twelve pithy steps for finding inner peace in a way that can be applied to anyone's life.

Drawing upon his own life experiences, both before and after becoming a Benedictine monk, the author explains every step, illustrating each chapter with color reproductions of sacred art that he has embellished with comic flourishes. The winsome combination is sure to keep readers from taking themselves too seriously—which is already a first step on the path to humility. 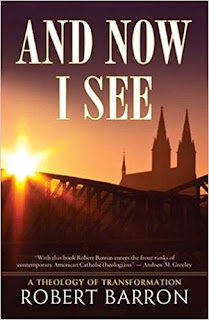 "This book rests upon the conviction that real metanoia, the transition from a mind of fear to a mind of trust, is possible. Due to the playful, strange, unpredictable, and relentless love of God, the imago in us can be polished and the great soul can emerge." - Excerpt from And Now I See

Bishop Robert Barron offers an accessible exploration of Christian theological concepts that anyone can comprehend. He divides his book into three sections as he examines Christianity as a source of human transformation.

In his first section, Bishop Barron argues that human nature is alienated from itself and thus humans are in need of a mediator who can draw them back to God and self. The second section takes up a renewed understanding of God in light of the alienated nature of humanity. In his final section, Bishop Barron contends that Christ is a healer and reconciler who seeks to draw humanity back into relationship with God. Along the way, Bishop Barron draws on sources as diverse as Dante, Paul Tillich, Thomas Merton and Flannery O'Connor. 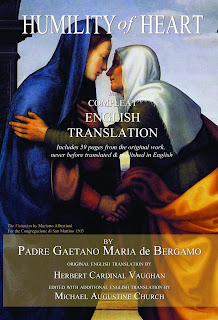 I also received a copy of Humility of Heart by Padre Gaetano Maria de Bergamo, translated by Herbert Cardinal Vaughan, the third Archbishop of Westminster, and edited by Michael Augustine Church. The author is also known as Father Cajetan de Bergamo. Jonathan Coe describes the book and the translation (in another edition) in Crisis Magazine:

Humility of Heart was translated into English by Herbert Cardinal Vaughan (1832-1903), the Archbishop of Westminster, during the last months of his life. He had read the book dozens of times and it was his constant companion for much of his adult life.

Father Cajetan (1672-1753) was professed a Minor Capuchin in 1692 and became one of the great Italian missionaries of the eighteenth century. His eulogy was brief but redolent with meaning: “Second to none in the customs of religious life, first in writing on things of every kind.”

The purpose of the first two-thirds of his book is to make the reader “conversant with the idea of humility in its necessity, it’s excellence and its motives.” The remaining third presents a practical examen of the virtue and a concluding meditation on the vice of pride.

A word or two on the hard-hitting tone of the book would be helpful. St. Alphonsus Liguori counseled other priests: “Be a lion in the pulpit, but a lamb in the confessional.” With Father Cajetan da Bergamo, we’re definitely getting the lion.

One consolation to the reader is that the good reverend comes clean about the issue of pride in his own life: “I am considered proud by those who know me, and they are not mistaken, for I show it by my vanity, arrogance, petulance, and haughtiness.”

If Father Cajetan is the lion, perhaps Father Wetta is a lamb? Both sound like appropriate Lenten reading!

I've decided to subdivide this list of books further, because the next three--yes, three more books--belong together because they offer different challenges.
Posted by Stephanie A. Mann at 12:00 AM