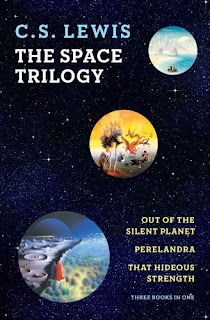 Last November and December, when my husband Mark wasn't feeling at all well, we read C.S. Lewis's Space Trilogy together: well, I read the three books out loud and we talked about them as we progressed through Ransom's adventures on Mars, Venus, and Earth. I had never read Perelandra; we had read That Hideous Strength for a reading group and I might have read Out of the Silent Planet long, long time ago, probably at Mark's urging.

Mark had read and enjoyed the books before and my reading aloud distracted him a little.

Our timing for reading Perelandra was perfect, we decided: just before the Solemnity of the Immaculate Conception. Most of this novel is a long verbal and then physical battle between Ransom and Weston (or the Un-man) for the soul of Perelandra's Eve, the Green Lady. She is perfectly innocent, in complete unity with Maleldil: she is full of grace. If she disobeys Maleldil's command not to stay overnight on the Fixed Land, she will bring division and disharmony to Perelandra, that is, Original Sin.

At one point, the Un-man points out that such a Fall may bring about a great good: the Incarnation of Maleldil on Perelandra to heal this disruption.

By telling this space fiction story, C.S. Lewis was creating a theologically themed image of an unfallen world in contrast to our own fallen world with the successful temptation of Eve to eat of the one tree God forbade her to, the Protoevangelium that a Savior would come to crush the Serpent, the providential choice of Mary of Nazareth to be the Mother of God, preserved from that Original Sin with a will united to God's, full of grace.

So I started to write about this theological lesson, set it aside when Mark died in January this year, submitted it a couple of places, got rejected, and then set it aside until this November. The National Catholic Register accepted it and published it as a blog post for the Solemnity of the Immaculate Conception. Since December is dedicated in traditional Catholic devotion to the Immaculate Conception, here's the link.

When he explained the doctrine of the Immaculate Conception to his former Oxford Movement friend in his 1865 A Letter Addressed to the Rev. E. B. Pusey, D.D. on Occasion of his Eirenicon, Saint John Henry Newman described what would have happened if Eve had rejected the temptation of eating the fruit of the Tree of Good and Evil as Tinidril had rejected the temptation of staying on the Fixed Land:

Suppose Eve had stood the trial, and not lost her first grace; and suppose she had eventually had children, those children from the first moment of their existence would, through divine bounty, have received the same privilege that she had ever had; that is, as she was taken from Adam's side, in a garment, so to say, of grace, so they in turn would have received what may be called an immaculate conception. They would have then been conceived in grace, as in fact they are conceived in sin.

But our Eve did not stand the trial; nor did Adam; their children were “conceived in sin.” And we would never have known how to climb back “into love and trust again” unless God the Father had sent His Son to be Incarnated in the womb of the Mother of God, prepared by her Immaculate Conception to be united to His Will.

The second volume of C.S. Lewis’ Space Trilogy provides a creative meditation on Salvation History by imagining an alternative story of a world without a Fall, without Original Sin—but also without a Savior.

O Mary, conceived without sin, pray for us who have recourse to thee!
Posted by Stephanie A. Mann at 12:00 AM

Email ThisBlogThis!Share to TwitterShare to FacebookShare to Pinterest
Labels: C.S. Lewis's Space Trilogy, Out of the Silent Planet, Perelandra, That Hideous Strength, the Immaculate Conception, the New Eve