The Marriage of Margaret Tudor and James IV of Scotland 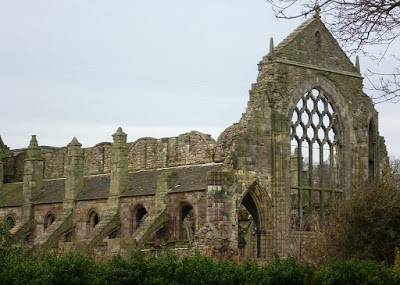 Margaret’s train on the journey north by York, Durham, Newcastle and Berwick was headed by the Earl of Surrey, with his Countess as the princess’s chaperone. John Young, Somerset Herald, was sent along to make an official record. The ladies rode on palfreys or were drawn on litters, escorted by gentlemen, squires and pages, with trumpeters, drummers and minstrels. The party crossed the border into Scotland on August 1st, 1503, to be greeted by the Archbishop of Glasgow and a thousand Scottish lords and gentlemen ‘in rich jewels and massy chains’. At Dalkeith Castle on August 3rd, King James himself, in a crimson velvet jacket, rode in with a train of horsemen. Margaret curtsied deeply and he bowed low and they kissed in greeting. They talked together privately and sat together at supper and afterwards he played to her on the clavichord and the lute. Two nights later she played for him.

On Monday August 7th, they made a state entry into Edinburgh, both of them in cloth of gold trimmed with black velvet or black fur. To tremendous cheers and the clangour of bells they rode in on one horse, with Margaret riding pillion behind the King, escorted by two hundred knights and pausing to witness numerous pageants. The union of the thistle and the rose was celebrated next morning in the chapel of Holyrood-house. Margaret wore a gown trimmed in crimson and the Countess of Surrey bore her train, while James was magnificent in white damask with crimson satin sleeves. After the marriage ceremony conducted by the archbishops of Glasgow and York there was a nuptial mass and a short coronation ritual, with the King’s arm round his new queen’s waist much of the time. There followed a splendid feast of fifty or sixty dishes including roast crane and roast swan, and then dancing and supper until finally at last ‘the King had the Queen apart and they went together’. Edinburgh blazed with bonfires that night.

More about Margaret Tudor, who would bear James IV six children and serve as Regent for their only surviving child named James (the second son born given that name), after the king was killed at the battle of Flodden Field in 1513, here. 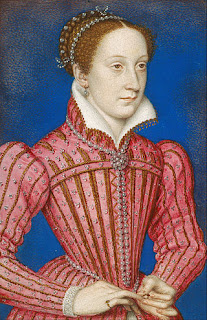 Holyrood Abbey has a fascinating history. It was an abbey of Augustinian Canons founded by King David I in the twelfth century. During the Scottish Reformation, a mob destroyed the altars and plundered the church and the abbey was suppressed. The abbey was restored for the coronation of Charles I in Scotland, rebuilt further during the reign of Charles II, and as the Catholic Encyclopedia explains, it was truly a royal abbey and church and is much associated with Mary, Queen of Scots:

From the middle of the fifteenth century the abbey was the usual residence of the Scottish kings, and James V spent considerable sums on its repair and enlargement. In 1547 the conventual buildings, as well as the choir, lady chapel, and transepts of the church were destroyed by the commissioners of the English Protector Somerset, and twenty years later Knox's"rascal multitude" sacked the interior of the church. Queen Mary's second and third marriages took place at Holyrood, as well as other tragic events of her reign. From the Reformation to the Restoration little was done to Holyrood, but about 1670 the adjoining palace was practically rebuilt by Charles II. His Catholic successor, James II, ordered the nave of the church to be restored for Catholic worship, and as a chapel for the Knights of the Thistle; but he had to abandon his kingdom a year later. The nave roof was vaulted in stone in 1758, but fell in shortly afterwards, and all that remains of the once famous abbey church is now the ruined and roofless nave, of the purest Early English architecture, with some remains of the earlier Norman work.

Felix Mendelssohn was inspired by his visit to Holyrood Abbey's ruins to compose his third symphony, The Scottish Symphony. This website transcribes his impressions of the ruins:

It is clear from Mendelssohn’s letters even before their tour that he intended to write a symphony based on his Scottish experiences and the opening of the work came to him on the evening of 31st July 1829 when "In the evening twilight we went today to the palace where Queen Mary lived and loved; a little room is shown there with a winding staircase leading up to the door; up this way they came and found Rizzio in that little room, pulled him out, and three rooms off there is a dark corner, where they murdered him. The chapel close to it is now roofless; grass and ivy grow there, and at that broken altar Mary was crowned Queen of Scotland. Everything around is broken and mouldering, and the bright sky shines in. I believe I found today in that old chapel the beginning of my Scottish Symphony."

When I listen to the symphony thinking of Mary, Queen of Scots' life and adventures, joys and sorrows, controversies and sad end, it creates the most dramatic images in my mind. The same would apply to Margaret Tudor, married, widowed, remarried, etc!
Posted by Stephanie A. Mann at 12:30 AM