The Exeter Madonna at The Frick 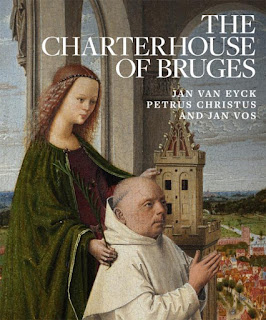 At The Frick in New York City, an exhibition explores some artifacts and paintings from the world of the Carthusians, associated with the Charterhouse of Bruges:

This exhibition brings together two masterpieces of early Netherlandish painting commissioned in the 1440s by the Carthusian monk Jan Vos, reuniting them for only the second time in their history. The panels — the Frick’s Virgin and Child with St. Barbara, St. Elizabeth, and Jan Vos, by Jan van Eyck and his workshop, and The Virgin and Child with St. Barbara and Jan Vos by Petrus Christus, now in the Gemäldegalerie, Berlin — were commissioned by Vos during his tenure as prior of the Carthusian monastery (or charterhouse) of Bruges. The panels are presented with Carthusian objects that place them in their rich monastic context, offering a glimpse into the visual environment of the charterhouse and highlighting the role that images played in shaping devotional life and funerary practices in Europe during the late Middle Ages.

The Charterhouse of Bruges is on view in the museum’s Cabinet Gallery and is curated by Emma Capron, the 2016–18 Anne L. Poulet Curatorial Fellow at The Frick Collection. The exhibition is accompanied by a fully illustrated scholarly catalogue published by The Frick Collection in association with D Giles Ltd., London.

The Virgin and Child with St. Barbara and Jan Vos by Petrus Christus is also known as the Exeter Madonna because its "first modern owner" was Brownlow Cecil, the 2nd Marquess of Exeter (second creation in 1801). He acquired it in 1815 and sold it in 1888.

The Charterhouse of Bruges referred to in this exhibit was at Genadendal. The other famous Charterhouse in Bruges was the Sheen Anglorum, founded after the Carthusians in England were either executed, starved to death, or sent into exile during the English Reformation.
Posted by Stephanie A. Mann at 12:30 AM

Email ThisBlogThis!Share to TwitterShare to FacebookShare to Pinterest
Labels: Bruges, Sheen Anglorum, the Carthusian order, the Exeter Madonna, The Frick Collection, the Netherlands