In response to the attempted invasion of England by Spain by the Armada, from late August through October in 1588, the Elizabeth government arranged several executions of Catholic priests and/or laity to demonstrate the fate of traitors. In Chichester and in Canterbury on October 1, 1588, the government planned two more group executions of priests.
In Chichester, something unusual happened—one of the priests on the scaffold recanted and agreed to take the Oath of Supremacy. Four priests had been condemned to death on September 30, but one of the four had already taken the Oath of Supremacy after condemnation to avoid being hanged, drawn, and quartered.
Father Edward James and Father Ralph Crockett had been arrested on April 19, 1586 and held in prison in London for more than two years without trial (from April 27, 1586). After the failure of the Spanish Armada, these imprisoned Catholic priests were prime targets of the English government for vengeance and punishment. Fr. James and Fr. Crockett were tried in Chichester along with Father John Oven and Father Francis Edwardes, found guilty and sentenced to death, but Fr. Oven took the Oath of Supremacy and was reprieved.
Then on October 1st, at Broyle Heath, Fr. Edwardes took the Oath of Supremacy and was reprieved--Fr. James and Fr. Crockett refused to recant and the butchery of their execution was carried out, after they first absolved each other on the scaffold. So often when we tell the story of the Catholic recusants and the Catholic priests of that recusant era, we emphasize the heroic faithfulness of those who suffered and died. This story reminds us that some who faced the crisis of life and death chose to recant their Catholic faith and avoid martyrdom.

This blog points out that: "Blessed Ralph Crockett and Blessed Edward James had never offered a mass or heard a confession in England. They accomplished their ministry in their death." They were beatified by Pope Pius XI in 1929 (among many others). 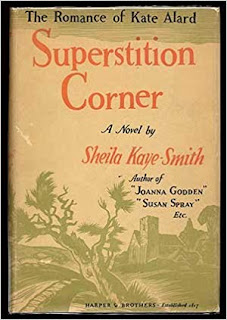 In her novel Superstition Corner, the Catholic convert from Anglicanism Sheila Kaye-Smith depicts the effect of Father Edwardes recanting and accepting the Oath of Supremacy on a recusant Catholic who knew him. Catherine Alard has traveled to Chichester, hoping to meet her brother who is now a Catholic priest, and hears about the impending executions:

Among much that was painful for her to hear, Catherine learned that the names of the other two priests were Ralph Crockett and Edward James, so she now knew for certain that Father Oven had refused his martyr's crown. The number of her honest men was dwindling . . . miserere mei. . . . She felt strangely moved and exalted, almost light-headed, as at last she jostled her way under the gate and came out on the high-road leading to the Broyle.

About a mile farther on the gallows rose up before her, and she felt a curious fear and constriction of her heart. This would not be the first hanging she had seen, but it would indeed, as the landlord had said, be different from the others. To-day she would see men die, but not for their own sins. No doubt their sufferings would be a passion offered for the sins of the unfaithful—for the unfaithful that they did not know as well as for the unfaithful that they knew. These three friends would die expiating her father's conformity, her mother's adultery, her friend's apostasy: they would wipe her world clean as they left it. . . . Yet before they died she would have to witness dreadful things, and for a moment her heart failed her. Though she had never been squeamish, she was glad to be on the outskirts of the crowd that swarmed round the scaffold.

Catherine witnesses the executions of Father Crockett, appalled by the animosity of the crowd toward the priest and horrified by his suffering:

Then silence fell: the executioner stood on the ladder watching the victim's struggles, and when they seemed to decrease gave the order for him to be cut down. He was caught as he fell, and his clothes torn off him, so that castration and dismemberment could follow while he was still alive. Catherine had never before seen an execution for high treason, and an ordinary hanging had always stopped short of this. She began to feel a little sick, and would have closed her eyes had she been able, but a kind of paralysis had taken her, and she could not move; she could only sit there staring and holding up her beads.

After seeing Father James suffer in the same horrible way, she notices that Father Edwardes’ execution is not proceeding apace, but that he has begun to cry out for mercy:

"Oh, Lord!" cried Catherine. "Oh, dear, dear Lord!" A great yell broke from the crowd, and she expected to see the wretched man carried up the ladder and flung off in a bundle. But the next moment she saw that something else was happening. Three men in black who had been standing with the magistrates on the scaffold now came forward, and she guessed that they were the Protestant ministers. They gathered round Francis Edwards (sic), who was vomiting. She knew that they were offering him his life at a price which in his terror and exhaustion he might pay. De profundus clamavi ad te, Domine: Domine, exaudi vocem meum. Oh, Lord, help him; oh, Lord, spare him. . . . Oh, Lord, let him fall down dead rather than deny his faith. . . . Oh, Lord, spare him. . . . Domine, Domine, exaudi vocem meum. The crowd was shouting and muttering—some were urging the martyr to change his faith and save his life. "'At, that's right 'at, that's right!" "Be a Protestant and live!" But others said: "You can never trust a Jesuit." "Set him free and he poisons us all." The cries swelled to a roar, and all the time a voice was shouting in her ear miserere mei! miserere mei! She did not know it was her own. . . .

She could stay no longer; the sheriff came to the edge of the scaffold to address the crowd, but she would not wait. She had seen enough—too much; and in that distracted moment she did not know which was too much—the sufferings of the martyrs or the sparing of the apostate. Francis Edwards had been spared—he would not have to climb that ladder, to endure that agony, to suffer that outrageous death. She was glad—she was glad. No, no—she was not glad. She was sorry.

Kaye-Smith’s description of the crowd and its changing fancies serve as a good example the expectations of the witnesses of the executions to see justice handed out effectively. They did not trust the recanting priest and might have admired the priests who endured their executions more. Please see the next post for the story of the Oaten Hill Martyrs at Canterbury, also on October 1 in 1588.
Posted by Stephanie A. Mann at 12:00 AM