John of Salisbury, RIP and St. Thomas a Becket 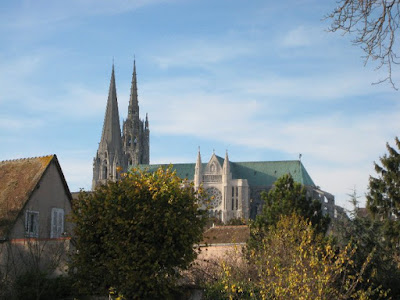 John of Salisbury, English bishop and associate of St. Thomas a Becket and Nicholas Breakspear (the only Briton to be elected pope, as Adrian IV), died on October 25, 1180--as the Bishop of Chartres. According to the Catholic Encyclopedia, he witnessed the martyrdom of St. Thomas a Becket:

Born about 1115; died 1180; a distinguished philosopher, historian, churchman, and scholar. Born near Salisbury, he went at an early age to Paris, where he studied arts and philosophy (1136-38) under Peter Abelard, Alberic of Reims, and Robert of Melun; then under William of Conches, Richard l'Evêque, and Theoderic of Chartres at the famous school at this latter town (1138-40); finally again at Paris, completing his studies in theology under Gilbert de La Porrée, Robert Pullus, and Simon of Poissy (1141-45). This solid education, under such brilliant masters, he perfected by some private teaching, perhaps with his lifelong friend Peter, Abbot of Moutier La Celle, near Troyes, with whom he was living in 1148. At the Council of Reims in this year, he was introduced to Theobald, Archbishop of Canterbury, by St. Bernard. After spending a few years at the papal Court at Rome, whither he went from Reims with Pope Eugene III, he returned to England and acted as private secretary to Theobald for several years, during which period he was repeatedly sent on delicate and important diplomatic missions to the Holy See, in 1159 he had "ten times crossed the Alps on his road from England" (Metalogicus, iii, prol., p. 113).

He was thus brought into intimate relations with princes and popes, especially with Henry II and his chancellor, Thomas à Becket, and with Pope Adrian IV, also an Englishman. In defending the rights of the Church, he incurred the kings displeasure in 1159 - when his forced seclusion enabled him to complete his two principal works the "Policraticus" and the "Metalogicus", both dedicated to Thomas à Becket - and again in 1163, when he was obliged to quit England. The next six years he spent with his friend Peter of La Celle, now Abbot of St. Remigius at Reims. Here he wrote "Historia Pontificalis". Thomas à Becket, who had succeeded Theobald as Archbishop of Canterbury in 1162, was soon obliged to follow John into exile. The latter steadily endeavoured to promote the cause of peace hetween the English king on the one hand and his archbishop and the Holy See on the other. Apparent success crowned those efforts in 1170, when both exiles returned. In a few months (29 Dec.) John witnessed the tragic murder of the saintly archbishop in the cathedral at Canterbury. In 1174 John became treasurer of Exeter cathedral. In 1176 he was appointed Bishop of Chartres. He attended the Third Lateran Council in 1179 and died the next year. He was interred in the monastery of St. Josaphat, near Chartres. 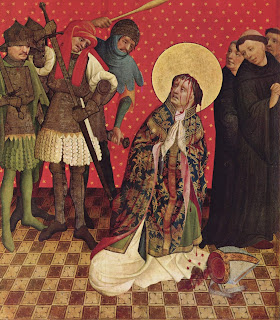 John of Salisbury was one of the most cultured scholars of his day. Notwithstanding the engrossing cares of his diplomatic career, his great learning and indefatigable industry enabled him to carry on an extensive and lifelong correspondence on literary, educational, and ecclesiastical topics with the leading scholars of Europe. His collected letters (over 300 in number), no less than his other works, form an invaluable source of the history of thought and activity in the twefth century. His fine taste and superior training made him the most elegant Latin writer of his time. He is equally distinguished as an historian and as a philosopher: he was the first medieval writer to emphasize the importance of historical studies in philosophy and in all other branches of learning. Naturally of an eclectic turn, he displayed in philosophy a remarkably sound and judicious critical spirit. Familiar with all the phases of contemporary scholastic controversies, he was himself among the first to formulate clearly the solution known as "moderate realism" in answer to the fundamental philosophical problem of the value and significance of universal ideas.

The significance of Bishop John of Salisbury's devotion to St. Thomas a Becket meant that even after King Henry VIII had destroyed the martyr's shrine and tomb, there were still relics and devotion to Becket on the Continent. Like the Augustinians in Paris at the Abbey of St. Victor, the relics and stained glass of Chartres continued the veneration of the "holy, blissful martyr" in the Catholic Church.

Photo of Chartres (c) Mark Mann. Not be to used without permission.
Posted by Stephanie A. Mann at 12:30 AM