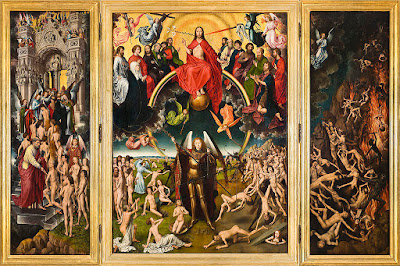 By the end of the first week in October the graveyards were popping up in lawns in our neighborhood—complete with “humerous” rhyming epitaphs and skeletons escaping the sod, while ghosts waved from the trees and jack-o-lanterns smiled on the porches—25 days before Halloween.

That afternoon, my sister visited our mother in the nursing home and reported to my brother and me later that Mother was still very anxious and uncomfortable. She had some outpatient surgery a few weeks before with some anesthetic and although the surgery had been successful, she had not been doing well.

The next morning (Wednesday), the nursing home called me and said they were transporting Mother to the emergency room. By Friday evening, she was back at the nursing home and under hospice care. My brother, sister, niece, and I visited her several times, especially when called by the hospice nurse on Sunday and Monday. At the same time my husband was ill and I had to take him to the emergency room for admission to the hospital, so I wasn’t with her when she died on Monday, October 16.

Planning her funeral, cleaning out her room at the nursing home, and getting my husband home from the hospital took all my attention for the next couple of weeks, so I never returned to this theme.

By the end of the first week of October this year the faux graveyards were displayed in front yards, grocery stores were selling Halloween candy and statues of skeletal cats and dogs—death seems to be all around us.

As the co-owner of two very lively dogs (terriers) I really don't like statues of skeletal dogs, especially the ones depicting a dog with a ball in his mouth!

We should not separate Halloween from its true purpose as the vigil of All Saints Day, the month of November, and prayer for all the Poor Souls in Purgatory, but, as usual, that can be difficult when these Holy Days have been so corrupted by commerce.

The front yards full of graveyards are meant to create a creepy and eerie atmosphere with appropriate lighting and sound effects especially on Halloween night when the trick or treaters come around.

But the image of the skeletons half in and half out of their graves has a Christian significance the creators may not recognize. We do think often of the dead and we often think of them overcoming death in some way. Christians believe that those who die in grace do overcome death.

In the Catholic Church, we dedicate a month to remembering the dead and praying for them. As we remember the dead, we think of what they have faced--and what we will face: the Four Last Things.

From All Hallows Eve, through All Saints Day, and then on All Souls Day, the Catholic Church is focused on the Four Last Things on these three days.

October 31, All Hallows Eve, is the vigil of All Saints Day and the reminder of Death, the first Four Last Thing. The ghosts and ghouls and phantoms of Halloween also remind us of Hell, which we fear, or should fear, even more than we fear Death.

November 1, All Hallows or All Saints, honors all the saints, known and unknown, those beatified and canonized and those who haven't been vetted and honored explicitly by the Church. That day is focused on Heaven.

November 2, All Souls Day, is focused on Judgment AND Heaven. Souls who have faced God's Judgment and are in need of purification prepare for Heaven in Purgatory. They have achieved salvation, but are not perfect or completely ready for Heaven. We pray for them and hope that others will pray for us when we are dead. 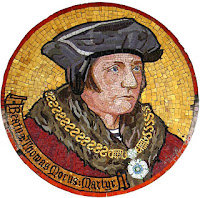 Prayer for the dead was a crucial issue in the religious debate before the English Reformation. As Eamon Duffy and other historians of the religious practices of the late Middle Ages in England have shown, it was an integral part of English life. They prayed for their dead and hoped their families would pray for them after they died. St. Thomas More saw this connection between the living and the dead under attack and responded in its defense, hoping that Henry VIII would defend and protect this Catholic practice as he had the Seven Sacraments.

In the The Supplication of Souls, St. Thomas More answered Simon Fish's Supplication of Beggars, in which Fish told Henry VIII that he was not in control of his country which is filled with poor beggars because of the priests whose demand for alms to pray and say Masses for the dead--a classic zero-sum view of salvation economy. According to Fish, if people are giving alms for prayers they aren't giving alms for the poor. More writes his answer representing the Poor Souls in Purgatory, who beg for prayers and penance from the living as they suffer for the effects of their sins on earth after death.

Neither More nor Fish can prove their statistical points (I have not read Fish's Supplication)--Fish thinks that there have been more poor in England since people started praying for the dead while More contends that "the poor you will always have with you" and that the poor on earth as well as the poor in purgatory benefit from the alms given to the Church as well as to the poor, arguing that the economy, both temporal and spiritual, is more complex and interconnected than Fish thinks.

More notes that Fish is using subterfuge, attacking the doctrine of Purgatory and prayer for the dead as a way to attack the entire sacramental system. He cites Fish's complaint about Henry VIII's one error--The Defense of the Seven Sacraments--and Fish's hatred of the priesthood as the real reasons for this attack on the Poor Souls in Purgatory.

Fish wants all the priests in England to be tied to carts, dragged through the streets, beaten, forced to marry, and get jobs. More asks, on behalf of the Poor Souls, how is this to be enforced, even if Henry would issue such commands. Are women to be forced to marry former priests? What jobs will they do? How will Fish prevent this sudden influx of unemployed priests from increasing the number of the poor? Has Fish really figured out the financial situation? What about all the poor the clergy and the Church assist everyday? What about the people the clergy employ--the builders, carpenters, laborers, etc? Where will they find employment?

Fish promises that the lame, the leprous, and the deaf, dumb, and blind will be healed, that Henry VIII's power and authority will be strengthened, and that the true gospel will at last be preached. Aha! say the Poor Souls: the supplicant for beggars must be as great as God in Genesis for he speaks and it IS.

More takes each point of Fish's argument and counters it, several times revealing More's experience of legislation and his knowledge of the courts and the law to expose Fish's errors. There is none of the personal invective so often highlighted in discussions of More's apologetic or polemic works. More does employ exaggeration, mockery of Fish's ignorance, irony, and sarcasm. He offers scriptural examples and arguments from the Fathers, appealing to the authority of the Church through the centuries against these new views of Christian doctrine from Luther and Tyndale.

He ends the Supplication with pleas from the Poor Souls for prayers. They also advise the living on how to prepare for death by recounting their own regrets. They warn against preparing more for the funeral arrangements and less for death and judgment. They regret that they relied so much on comforts and luxuries in this life and did not do penance for their sins to expiate the temporal punishments that remained even after they repented and confessed their sins. They beg for our prayers and promise theirs for us once they are in heaven.

The Poor Souls regret that they forgot to pray for so many of their loved ones when they were living:

Know well, dear friends, that among the many great and grievous pains that one suffers here—of which God send you the grace to suffer either none or few—the uneasiness of one’s conscience in the consideration of one’s uncharitable forgetfulness is not the least of them all.

Therefore, dear friends, let our folly teach you wisdom. Send here your prayer, send here your alms before you. . . .

We wish to God we ourselves had done as we now counsel you to do.

More's Poor Souls beg all on earth to remember them:

On their part, the Poor Souls promise to greet the living someday in heaven:

So may God keep you out of here, or not long here, and bring you shortly to that bliss to which, for the love of Our Lord, you help bring us. And we will set hand to help you join us there.

Image at the top: Hans Memling, The Last Judgement.
Posted by Stephanie A. Mann at 12:30 AM

Email ThisBlogThis!Share to TwitterShare to FacebookShare to Pinterest
Labels: All Hallows Eve, All Saints Day, All Souls Day, Halloween, November, prayer for the dead, St. Thomas More, the Four Last Things, The Supplication of Souls