Saint Philip Howard and His Dog 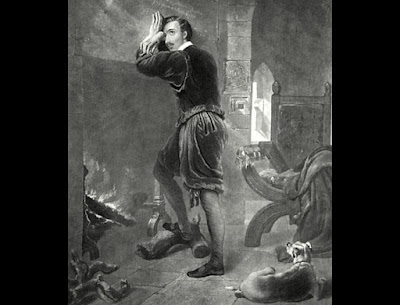 From my post last year on the National Catholic Register blog roll:

In a 19th century engraving (above), Sir Philip Howard, the 20th Earl of Arundel, leans against the wall above a fireplace. He has just inscribed the words “Quanto plus afflictionis pro Christo in saeculo, tanto plus gloriae cum Christo in futuro.” (“The more affliction we endure for Christ in this world, the more glory we shall obtain with Christ in the next.”) He is young, handsome, well-dressed: he is in the Tower of London, looking toward the source of sunlight in his cell. On the floor behind him, a dog looks up at him, perhaps awakened by his master’s sigh. Someone who loves dogs—and is devoted to St. Philip Howard for his conversion, his fortitude and his example—sees the bond between owner and pet clearly in this drawing. Howard is often depicted with his dog in statues and stained glass portraits, and the group painting of the Forty Martyrs of England and Wales, commissioned when Howard and the others were canonized in 1970. . . . 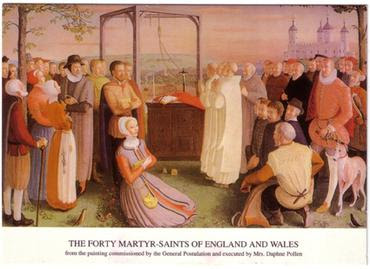 Howard enjoyed the companionship of his dog and yet I think he must have known how hard it was for an active dog like a greyhound to share his imprisonment. Howard was a young man, in love with his wife, longing to see his son and daughter, used to exercise and activity, hunting, jousting and dancing at Court; yet he surrendered all those hopes and good things to be faithful in his prison cell to Jesus and His Church. Since I enjoy the company of dogs, I’ve written a poem about Howard and his dog:

Faithful old dog, do you recall
The days of frolic and fun?
When walls were trees,
Stone floors were earth and
Low ceilings sky and sun?
When you and my other hounds
Sighted the deer and coursed?
But captive now, your eyes follow me
As I pace and pray, and wait
And wait in this cell for death.
If you so dumb, can be so true,
And trusted to carry words
To him whom my dearest love doth know—
If you, so strong can be so meek,
What else can I do—?
But bear affliction in this world for
Glory with Christ in the next—but Oh!—
How I long to see you course
And run as you once did run,
Chasing the deer and finding him in the glorious sun!

Accounts of Howard’s life don’t tell us what happened to the dog after Howard died, or even what its name was. Perhaps it was returned to Arundel Castle, and lived out its days with Anne.

Saint Philip Howard, pray for us!
Posted by Stephanie A. Mann at 12:30 AM