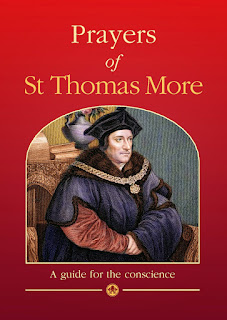 In a letter to History Today, Hilary Mantel states that Thomas More's "conscience [was] captive to tradition and authority"--as though that were a bad thing. Thomas More's understanding of conscience, its formation, and its decision-making process was that the individual conscience must be responding to God's authority and the traditional teaching of the Catholic Church. I'm presuming now, but Mantel might think of conscience as being captive only to the individual's interpretation of events and actions and being consistent with oneself--what Blessed John Henry Newman in the nineteenth century would call conscience's counterfeit.

More offered Cromwell an explanation of the true meaning of conscience in his June 3, 1535 letter to his daughter Meg about his recent interrogation in the Tower of London. Cromwell was accusing him of a double standard, claiming his conscience was better than a heretic's conscience. More explained that the heretic was not appealing to conscience, which should have led him to follow the Church Jesus founded, but to his own ego, which had led him to reject the truth and develop individual ideas about the Church and salvation:

Whereunto I answered I would not dispute the King's authority, what his Highness might do in such case, but I said that verily under correction it seemed to me somewhat hard. For if it so were that my conscience gave me against the statutes (wherein how my mind giveth me I make no dec­laration), then I nothing doing nor nothing saying against the statute, it were a very hard thing to compel me to say either precisely with it against my conscience to the loss of my soul, or precisely against it to the destruc­tion of my body.

To this Master Secretary said that I had before this when I was Chan­cellor examined heretics and thieves and other malefactors and gave me a great praise above my deserving in that behalf. And he said that I then, as he thought and at the leastwise Bishops did use to examine heretics, whether they believed the Pope to be the head of the Church and used to compel them to make a precise answer thereto. And why should not then the King, since it is a law made here that his Grace is Head of the Church, here compel men to answer precisely to the law here as they did then concerning the Pope.

I answered and said that I protested that I intended not to defend any part or stand in contention; but I said there was a difference between those two cases because at that time, as well here as elsewhere through the corps of Christendom, the Pope's power was recognized for an undoubted thing which seems not like a thing agreed in this realm and the contrary taken for truth in other realms. Whereunto Master Secretary answered that they were as well burned for the denying of that as they be beheaded for deny­ing of this, and therefore as good reason to compel them to make precise answer to the one as to the other.

Whereto I answered that since in this case a man is not by a law of one realm so bound in his conscience, where there is a law of the whole corps of Christendom to the contrary in matter touching belief, as he is by a law of the whole corps though there hap to be made in some place a local law to the contrary, the reasonableness or the unreasonableness in binding a man to precise answer, standeth not in the respect or difference between beheading and burning, but because of the difference in charge of con­science, the difference standeth between beheading and hell.

In his chapter on St. Thomas More in The Cambridge Companion to Thomas More ("More and the Heretics"), Richard Rex notes that More--and in this he certainly was a man of his time--was certain that he knew the truth. Catholic Christianity was the truth and no one had the right to deny or ignore the truth. Rex notes that we post-modernists can hardly imagine this certainty (our only certainty would be perhaps that we cannot be certain!). In his role as Henry VIII's Chancellor, he was sworn to assist the Church in finding heresy and he fulfilled that role. More regarded the obdurate heretic as a danger to society, an egoist deciding his own interpretation of God's revelation, and a person in certain danger of damnation. Thus, when More made his appeal to his right to follow his conscience, he asserted that his conscience was responding not to his own interpretation but to the teaching of the universal Church, an authority high above Henry VIII, even if the monarch did take over the Church in England.

On the Acton Institute website, writer Marc D. Guerra sums up More's understanding of conscience well; he was indeed guided by tradition and authority:

Whereas modern doctrines of conscience characteristically emphasize the self-sufficiency of the individual’s judgment, More stresses its communal nature. More, to be sure, recognized the uniqueness of the individual conscience. More was, after all, imprisoned precisely because he could not, in good conscience, swear allegiance to Henry VIII’s oath. But in contrast to the modern claim that the individual can create his own moral values, More saw the “formation of conscience” as “the fruit” of an education “in the truth.” Far from being the arbitrator and creator of its own moral order, the human conscience is in need of conforming to the truth. For More, the formation of conscience is the result of a long process in which one discovers a preexisting created moral order. This was, in some sense, the issue in More’s dispute with Henry. Henry sought to substitute his own law for the “higher law of God and Christ’s Church.” Nothing underscores the profound differences between More’s and the modernist’s understanding of conscience more than this fact: Whereas modern thought views the individual’s conscience as being above all other authorities, More’s conscience testifies to the superiority of the church’s authority to his king’s. More’s refusal to take Henry’s oath was not an act of civil disobedience but, rather, of obedience to truth and thus, in his view, an act of “genuine liberty.”
Posted by Stephanie A. Mann at 12:30 AM