480 Years Ago Today: The Trial of St. John Fisher 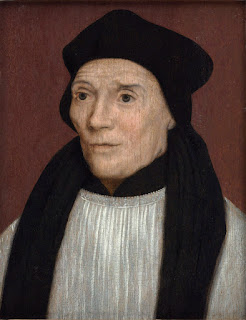 On June 17, 1535, John Fisher, former Bishop of Rochester (Henry VIII had stripped him of his title) left the Tower of London to be tried in Westminster Hall. The charge against him was that:

He falsely, maliciously, and traitorously wished, willed, and desired, and by craft imagined, invented, practised, and attempted to deprive the king of the dignity, title, and name of his royal estate, that is of his title and name of supreme head of the church of England, in the Tower, on 7th day of May last, when, contrary to his allegiance, he said and pronounced, in the presence of different true subjects, falsely, maliciously, and traitorously, these words: "The king our sovereign lord is not supreme head on earth of the church of England."

Rich, the Solicitor-General, was the main witness for the prosecution. He admitted to having played the part of an agent provocateur when he had visited the bishop in the Tower with the confidential message from the king, and he gave Fisher's denial of the Royal Supremacy in evidence against him despite the solemn promise given to him in the name of the king that this would not happen. The cardinal protested indignantly at Rich's treacherous conduct[.]

Of course, there was no real, just trial: the purpose of the gathering in Westminster Hall was to sentence to death the man Henry VIII had previously regarded as the holiest bishop in England. Although he argued that when he spoke to Richard Rich there was no malice or falsehood, Thomas Audley as Chancellor told him that any speaking against the King's position as Supreme Head of the Church of England was treason.

My lords, I am here condemned before you of high treason for denial of the King's supremacy over the Church of England, but by what order of justice I leave to God, Who is the searcher both of the king his Majesty's conscience and yours; nevertheless, being found guilty, as it is termed, I am and must be contented with all that God shall send, to whose will I wholly refer and submit myself. And now to tell you plainly my mind, touching this matter of the king's supremacy, I think indeed, and always have thought, and do now lastly affirm, that His Grace cannot justly claim any such supremacy over the Church of God as he now taketh upon him; neither hath (it) been seen or heard of that any temporal prince before his days hath presumed to that dignity; wherefore, if the king will now adventure himself in proceeding in this strange and unwonted case, so no doubt but he shall deeply incur the grievous displeasure of the Almighty, to the great damage of his own soul, and of many others, and to the utter ruin of this realm committed to his charge, wherefore, I pray God his Grace may remember himself in good time, and harken to good counsel for the preservation of himself and his realm and the quietness of all Christendom.

According to this website, the court was moved but not enough to do the right thing:

William Rastell, a lawyer nephew of Sir Thomas More who was present at the Fisher trial, leaves us the following account of the bishop's valedictory statement: "He showed himself excellently and profoundly learned, of great constancy and of a marvellous godly courage, and declared the whole matter so learnedly and therewith so godly, that it made many of those present, and some of their judges also, so inwardly to lament, that their eyes burst out with tears to see such a great famous cleric and virtuous bishop to be condemned to so cruel a death by such impious laws and by such an unlawful and detestable witness (Richard Rich), contrary to all human honesty and fidelity."

From June 17 to June 22, Cardinal Fisher--Pope Paul III had named him a cardinal in the hopes that Henry VIII would show some respect and leniency to a prince of the Church, seriously misjudging Henry--prepared for death. As he had suffered great want and deprivation in the Tower of London, so much so that he was too weak to walk from the Tower to Westminster Hall, Henry commuted his sentence from being hung, drawn and quartered at Tyburn to being beheaded on Tower Hill. Long before his trial, he had begged Cromwell for some clothing and food (on December 22, 1534):

I beseech you to be a good master to me in my necessity. I have neither shirt nor suit, nor yet other clothes, that are necessary for me to wear, but that be ragged and rent shamefully. Notwithstanding I might easily suffer that, if they would keep my body warm. But my diet also, God knoweth how slender it is at many times, and now in mine age my stomach may not away but with a few kinds of meats, which if I want I decay forthwith, and fall into coughs and diseases of my body, and cannot keep myself in health. But as our Lord knoweth, I have nothing left unto me to provide any better, but as my brother of his own purse layeth out to me to his great hindrance.

Wherefore good Master Secretary eftsoons I beseech you to have some pity upon me, and let me have such things as are necessary for me in mine age and especially for my health. And also that it may please you by your high wisdom to move the king's highness to take me unto his gracious favour again, and to restore me unto my liberty out of this cold and painful imprisonment; whereby ye shall find me to be your poor beadman for ever unto Almighty God, who ever have you in his protection and custody.

He had also begged to have a confessor and attend Mass, but to no avail. Henry and Cromwell couldn't even allow Fisher some peace and comfort in his last days:

Chapuys, the imperial ambassador, wrote to Charles V on 30 June 1535: "They gave him (Fisher) as a confessor, a sworn enemy of his, and the staunchest Lutheran in the world as well as the originator of all the devilish acts practiced here; who, however, was so much edified by the bishop's countenance and behavior on the scaffold that he ceases not to say, that one of the best and holiest men in the world has been executed."

Henry VIII would go on to try to destroy all the evidence of Bishop Fisher's good work, even that great work Fisher had done with the support of Henry VIII's own grandmother, Margaret Beaufort, at St. John's College, University of Cambridge. He had preachers denounce Fisher (and More), diplomats denigrate his career, and everything possible done to remove remembrance of this great and holy man. Bishops Gardiner (another blot against his character) and Sampson also attacked Fisher in print after his death. Cromwell blamed the Pope for Fisher's execution, saying that if he had not been named Cardinal, Henry might have . . . what? St. John Fisher had opposed Henry's wishes in the Great Matter from the beginning; he was never going to receive any mercy or even justice.
Posted by Stephanie A. Mann at 12:30 AM