Blessed Philip Powell (sometimes spelled Philip Powel) (2 February 1594–30 June 1646) was a lawyer who became a Benedictine monk and priest, serving as a missionary in England during the period of recusancy. He was martyred at Tyburn. Powell is usually said to have been born in Tralon, Brecknockshire, Wales. From his youth he was a student of law, taught principally by David Baker, (who would later become a Benedictine himself, taking the name Augustine Baker). At the age of sixteen he went to study at one of the Inns of Court, London, and afterwards practiced civil law.

So he must have conformed and taken the Allegiance Oath required by James I after 1606, if he was studying and practicing civil law in London--thus he must have experienced some kind of reversion or conversion, discerned a vocation, left England, and studied for the priesthood. Perhaps like David Baker's family, Powell's parents were Church Papists, avoiding the fines by attending Church of England services, but also attending Catholic Mass whenever they could. 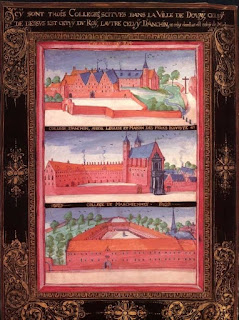 Three or four years later he received the Benedictine habit, becoming part of the community of St. Gregory at Douai (now at Downside Abbey, near Bath). The Benedictine monastery in Douai was named for Pope St. Gregory the Great; founded in 1605, its first prior was St. John Roberts, OSB, martyred at Tyburn on December 10, 1610. The biographies I've found do not state that he attended the English College at the University of Douai (pictured left), but that was the usual process.

In 1618 Powell was ordained a priest and in 1622 left Douai to go on mission in England. In around 1624 he became chaplain to the Poyntz family at Leighland, Somerset. According to this British History site, the Poyntz family maintained a close relationship with the Benedictine order:

About 1624 Philip Powell or Morgan, later martyred at Tyburn, became chaplain to the Poyntz family at Leigh Barton. Powell left Leigh c. 1642, and was followed by a succession of priests, usually Benedictines, who regarded Leighland as the centre of a mission in West Somerset. In 1627 Giles Poyntz built a chapel and an annexe for the priest behind his house. Giles was one of a group of 8 recusants reported in 1642, and 12 were presented in 1664. Prudence Poyntz (d. 1691), Giles's second wife, leaving Leigh to her kinsman Robert Rowe, apparently required that Rowe should either maintain a chaplain in the house or pay him for an agreed number of masses. Should the family fail to keep a chaplain they were to pay £300 to the Benedictine province. There were resident chaplains at Leigh until 1767, but thereafter the chapel was used only occasionally. A priest celebrated monthly for five 'reputed papists' in 1776, and a priest from Dunster was evidently visiting Leigh later in the century. A French émigré priest may have used the chapel c. 1808.

When the English Civil War broke out he retired to Yarnscombe and Parkham in Devon. He then served for six months as chaplain to the Catholic soldiers in General Goring's army in Cornwall, and, when that force was disbanded, took ship for South Wales. The vessel was captured on 22 February 1646, and Powell was recognized and denounced as a priest.

On 11 May he was sent to London and confined in St. Catherine's Gaol, Southwark, where his treatment brought on a severe attack of pleurisy. His trial, which had been fixed for 30 May, did not take place till 9 June, at Westminster Hall. He was found guilty of being a priest and was hanged, drawn, and quartered at Tyburn. It is recorded that that when informed of his death sentence, Powell exclaimed "Oh what am I that God thus honours me and will have me to die for his sake?" and called for a glass of sack (or sherry).  The martyr's crucifix, which had formerly belonged to Feckenham, last Abbot of Westminster, is preserved at Downside, with some of his hair and a cloth stained with his blood.

He was beatified by Pope Pius XI in 1929. He is one of the six Gregorian martyrs: Blessed George Gervase (1608) ; Saint John Roberts (1610); Blessed Maurus Scott (1612); Saint Ambrose Barlow (1641); Blessed Philip Powell (1646), and Blessed Thomas Pickering (1679) honored at Downside Abbey, established after the French Revolution led to the suppression of the monastery at Douai.
Posted by Stephanie A. Mann at 12:30 AM