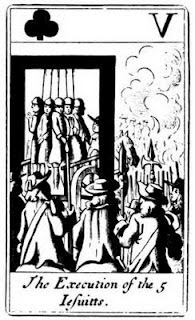 The Jesuits in Britain website gives some background to the Popish Plot, specifically how intra-Catholic conflict contributed to the anti-Jesuit, anti-Catholic conspiracy dreamed up by Titus Oates:

There were two separate forces behind the Popish Plot (known to some Catholics as the Presbyterian Plot). One was political. For many years the old Cromwellian Lord Shaftesbury and the puritan (Whig) faction had been stoking the fires of religious hatred against Catholics and France, in a long game to end absolute monarchy and once again to depose a king. Charles II openly favoured religious toleration of Catholics. This meant a significant minority in parliament always voted with the king. The Whigs therefore wanted to eliminate the Catholics in parliament. The Plot was constructed against the Catholics at court – the Queen, the Duke and Duchess of York, and their clergy, many of whom were Jesuits. The ultimate target, the King, exerted his energy to defend his Queen and his brother. He could not defend all the accused despite the clearly absurd nature of the accusations.

Non Jesuit Catholics were seeking an oath of allegiance to the King which could be accepted by Rome and allow them constitutional rights. Jesuits always blocked this, being unable to compromise their obedience to the pope. In this way they made an enemy of Dr. Sergeant, a secular Catholic priest – the secondary force which caught so many Jesuits in the plot. Early in the onset of hysteria Dr. Sergeant made false denunciations of Jesuits to the Privy Council which lent credence to the plotters. . . .

More on Father John Sergeant here, who seems to have been a contentious figure. This page on the Jesuits in Britain website includes his portrait.

Some of the first to be arrested were the Jesuits who had spurned Oates at St. Omer – William Ireland and Bl Thomas Whitbread who was English provincial. Fr Whitbread was tried in June 1679 alongside fellow Jesuits John Fenwick, John Gavan, William Harcourt and Anthony Turner. Fr Gavan, who was the spokesman, presented an eloquent defence. A brave group of Jesuit novices travelled from St. Omer to give evidence that Oates had been at St Omer's on crucial dates when he claimed to be in London witnessing Jesuit plotting. But the judges argued that as Catholic witnesses could receive a papal dispensation to lie on oath, they were not credible.

The five were hanged at Tyburn where the crowd stood in silence for an hour while each made a speech maintaining his innocence. On the scaffold they were offered the King’s pardon on condition they admit their guilt, but all refused.

Pope Pius XI beatified these five martyrs in 1929; St. Giles-in-the-Fields would be well-worth a visit on a pilgrimage to London, as they, and six other Popish Plot martyrs, are buried there. Perhaps they should be exhumed, however, and reburied at Stonyhurst, where they could receive more appropriate honors and devotion?
Posted by Stephanie A. Mann at 12:30 AM