The Rosary and Anachronism

I noticed this post on the English Historical Fiction Authors page about the use of beads in prayer and the term "rosary":

The image of a Catholic kneeling in prayer, rosary in hand seems timeless. Having a Dark Ages character rub the beads while murmuring a prayer wouldn't be an anachronism, would it?

Yes and no. Christians, and people of other faiths such as Hindus, Buddhists, and Muslims, have used beads to keep track of the prayers they were repeating. In the fourth century, Egyptian Abbot Paul used 300 pebbles that he would drop. (Would picking up all those little stones count as penance, too?)

By the seventh century, at least some of the faithful used strings of beads.

The author notes that the term "Rosary" was not used in English until 1547.

Reading this post reminded me of an historical anachronism I found in a novel, Leonardo's Swans, set in Renaissance Italy. A character prays the Rosary and ends the decades with the Fatima prayer:  "O my Jesus, forgive us our sins, save us from the fires of hell, and lead all souls to Heaven, especially those in most need of Your Mercy". That prayer dates from the early twentieth century so a person in that era would not have added it to the recitation of the Rosary. 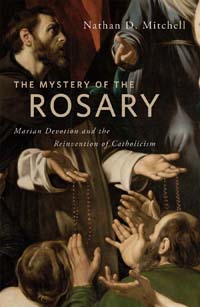 Another note for thinking about how Catholics have prayed the Rosary through the centuries: the Ave Maria ("Hail Mary") was just the two verses from St. Luke's Gospel, the first chapter (28 and 42) with the addition of the name Mary: Hail Mary, full of grace, the Lord is with thee (the Angel's greeting) and Blessed art thou among women, and blessed is the fruit of thy womb (her cousin Elizabeth's greeting). The second part--Holy Mary, Mother of God, pray for us sinners now and at the hour of our death--was a later addition, as was the name Jesus at the end of the second verse.

Anne Winston-Allen wrote Stories of the Rose, published by Penn State University Press, to trace the development and popularity of the Rosary prayer throughout the medieval period. Nathan Mitchell picks up the story of the Rosary and its importance to Catholic identity during the Counter- or Catholic Reformation period in his book The Mystery of the Rosary.
Posted by Stephanie A. Mann at 12:30 AM